When big stars work with new-age filmmakers, it's often discussed on social media and in movie reviews how the latter sometimes struggle to strike a balance between stardom that the actor brings in and the core idea of the film. 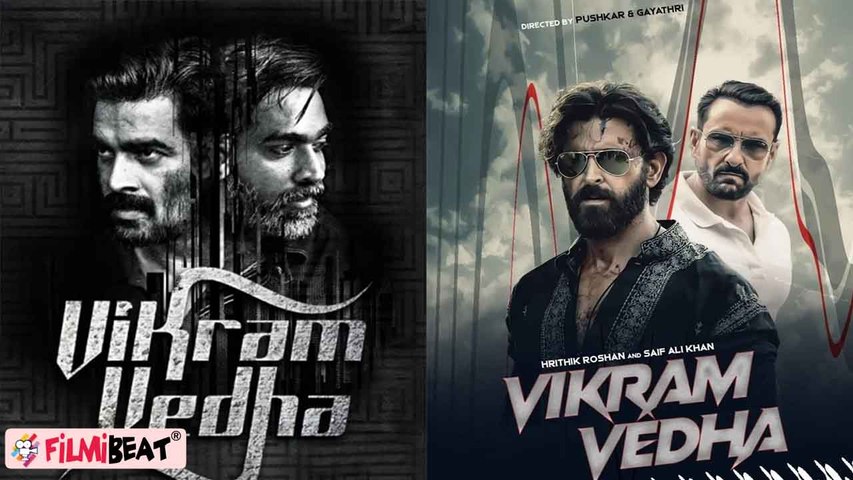 There are times when a director might be tempted to throw in certain ingredients to cater to the actors' fanbase, which in turn, would dilute his/her style of filmmaking that he/she is known for.

Recently, when Filmibeat caught up with director-duo Pushkar-Gayatri, we asked them whether they faced a similar dilemma for their upcoming film Vikram Vedha which features two of Bollywood's popular stars, Hrithik Roshan and Saif Ali Khan.

Pushkar told us, "When we wrote the script, we were at that phase where we were saying that we need to find that balance between what entertains and tell a good story. It's not an impossible task; somewhere or the other we have all seen films which not only entertained us but told a hard-hitting story as well. So, the whole process of why it took us all that time was multiple drafts of trying to find that balance."

He continued, "Inherently, Vikram Vedha has these moments which work really well as a theatrical experience; there are slow-mo shots, there's action, there's swag, there's attitude. All these things are a part of the story itself. It is essential to the story. These ain't things which are packed on to make it into an event film. If you notice carefully, everyone of those moments have a meaning. If it's a person walking in slow-motion, there's a purpose for that to happen. We just luckily found an idea that lend itself to this. There's was no pressure from any quarter to make the film in a certain way. I think we all worked towards what was right for the script."

Gayatri added, "If you can bring your actors and your team in the world then whatever they contribute will just better the work. That's when it gets collaborative. So, any little input from Hrithik or Saif will only enhance that work."

Pushkar recalled, "Just one or two days before the shoot, Hrithik Roshan called us over and we had a little chat where he basically told us to treat him like a new actor. He told us, "Forget all these things around me. But for you guys, I am like a new actor. Whatever you want me to do, I will do." This is Hrithik Roshan, the superstar saying that. That kind of collaborative trust he had in the whole project."

The Suzhal creator said that all the actors including Hrithik and Saif never did anything for their image. For them, it was always about the character.

"Whenever Hrithik speaks about a scene or moment or something like that, he is always looking at Vedha. It is never about anything else which comes into it. Similarly with Saif. He was purely looking at it like Vikram. There was no question about what would Hrithik do over here or Saif do over here. This was just mind-blowing for us. You don't expect that, but that actually happened, " Pushkar told Filmibeat in a conversation which also featured Hrithik Roshan.

He added, "Two days into the shoot and me and Gayatri looked at each other and we were like, 'This is perfect.' When that kind of collboration happens, things work."

Headlined by Hrithik Roshan and Saif Ali Khan with Radhika Apte and Rohit Suresh Saraf in pivotal roles, Vikram Vedha is an official remake of R Madhavan-Vijay Sethupathi's neo-noir crime thriller by the same name. The film which finds its roots in the Indian fable 'Vikram Aur Betaal' revolves around a no-nonsense cop and a dreaded gangster.