It all started when Toronto-based filmmaker Leena Manimekalai shared the poster of her documentary Kaali on Twitter on Saturday, and the poster led to a social media storm with the hashtag 'Arrest Leena Manimekalai'. Netizens were furious to see the poster, which shows the actress dressed as Goddess Kaali smoking and holding an LGBTQ flag in her hand. They attacked the filmmaker on social media saying that she has hurt their religious sentiments. 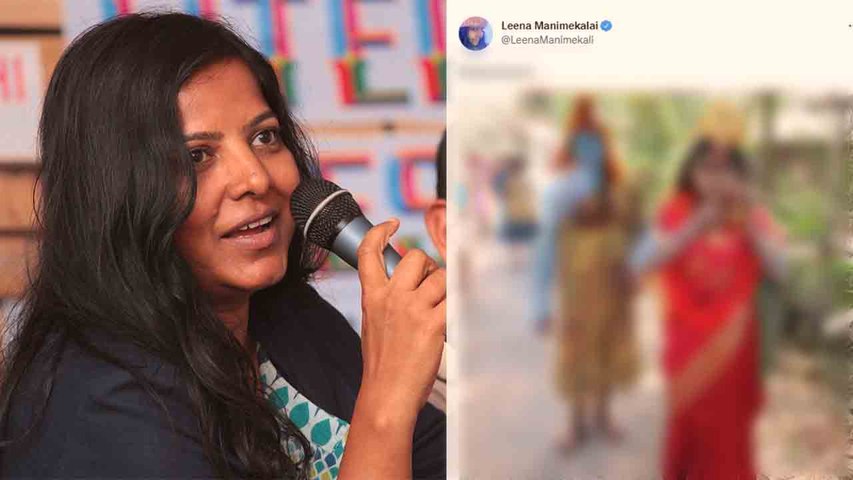 Amid all the hullabaloo around the Kaali poster, MP Mahua Moitra's stand on the entire issue has sparked new controversy.

While speaking at the India Today East Conclave in Delhi, Moitra said, "Within Hinduism, being a Kali worshipper I have the freedom to imagine my Kali in that way. That is my freedom and I don't think anyone's sentiments should be hurt. I have the freedom as much as you have to worship your God. To me, Kali is a meat-eating, alcohol accepting Goddess. If you go to Tarapith or the place around it ... you see the sadhus ... that is the version of Kali people worship." (sic)

She further said, "This is as much you have the freedom to worship a vegetarian, white cloth-wearing Goddess. I believe religion should always remain in the personal ambit and as long as I am not interfering in your space... I think we should be allowed to do that."

Mahua's comment did not sit down well with many netizens, and just like Leena Manimekalai, she was also at the receiving end of criticism.

Reacting to Mahua's comments, Trinamool Congress (TMC) also distanced itself from her comments and condemned her stand on the entire row.

Taking to Twitter, the party wrote, "The comments made by @MahuaMoitra at the #IndiaTodayConclaveEast2022 and her views expressed on Goddess Kali have been made in her personal capacity and are NOT ENDORSED BY THE PARTY in ANY MANNER OR FORM. All India Trinamool Congress strongly condemns such comments."

About a couple of hours ago, Mahua took to Twitter and penned a poem on the ongoing controversy, and asked the naysayers to stop telling her to be careful, and rather stand with her. She has also unfollowed the official Twitter handle of TMC.

On the other hand, Leena Manimekalai spoke to The Guardian regarding the whole hullabaloo around her comment on the Kaali poster and said that she does not feel safe anywhere at this moment.

She said, "It feels like the whole nation - that has now deteriorated from the largest democracy to the largest hate machine - wants to censor me. I do not feel safe anywhere at this moment."

Meanwhile, the The Aga Khan Museum in Toronto has removed the presentation of the documentary Kaali, after the Indian mission in Ottawa urged the Canadian authorities to take down all 'provocative material' related to the controversial film.

Responding to the uproar on Twitter, the museum said in a statement that it deeply regrets that Kaali had inadvertently caused offence to members of the Hindu and other faith communities.

The statement read, "The Museum deeply regrets that one of the 18 short videos from 'Under the Tent' and its accompanying social media post have inadvertently caused offence to members of the Hindu and other faith communities. Our Consulate General in Toronto has conveyed these concerns to the organisers of the event. We are also informed that several Hindu groups have approached authorities in Canada to take action. We urge the Canadian authorities and the event organisers to withdraw all such provocative material."