Actress Katrina Kaif on Wednesday (September 28) took to social media to share good wishes on Sunny Kaushal's birthday. The actor, who was last seen in Hurdang opposite Nushrratt Bharuccha, is celebrating his 33rd birthday today. Katrina scooped out a perfect picture to wish her brother-in-law. The photograph appears to be from Katrina and Vicky's wedding festivities. In the picture, Katrina wrote, "Jeete raho, khush raho (live long, be happy)," followed by cake and smiling emojis. 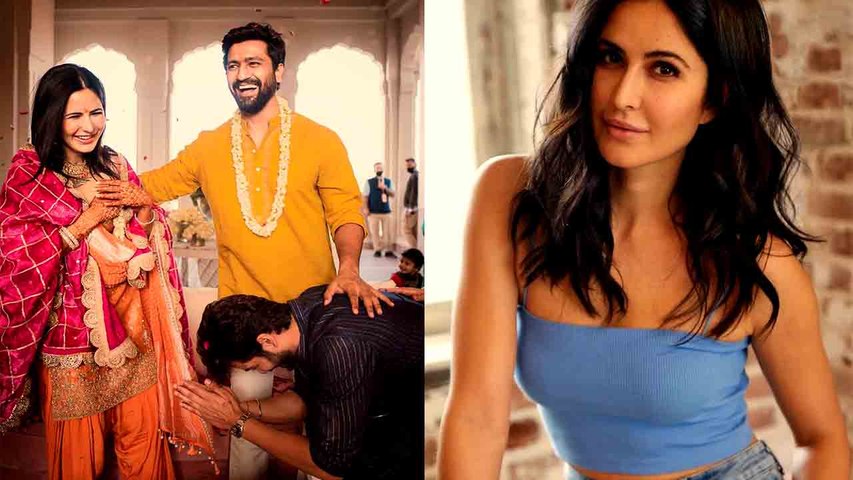 Katrina Kaif and Vicky Kaushal are having a great laugh in the candid photo as Sunny Kaushal bows down with folded hands to seek her blessings. Vicky, who stood near Katrina, kept one hand on Sunny's back and with the other hand held his wife.

The photo shows Katrina wearing an orange traditional dress and a pink dupatta wrapped around her shoulder while Vicky looked ever so handsome in a yellow and white set. Sunny, on the other hand, wore a black outfit. Both Katrina and Vicky have white garlands around their necks.

Vicky too wished his brother Sunny with a cool picture and captioned his post as,"Happy Birthday to the most sarv gunn sampann Kaushal! Love you." Meanwhile, their father, Sham Kaushal, also gave his blessing to Sunny with a picture collage of a little and an adult Sunny. "Wish you a very Happy Birthday Sunny Puttar. May God's blessings be always with you. As a father feeling blessed to have a son like you. Always love and blessings. Rab Rakha," he wrote.

The unseen picture is from inside the Six Sense Fort Barwara in Sawai Madhopur, Rajasthan, the venue where Katrina took wedding vows with Sunny's elder brother Vicky Kaushal, which took place last December. They both dated for two years. The couple hosted a grand yet private wedding in the presence of close family and friends. Very few people from the industry were invited.

Sunny Kaushal made his Bollywood debut as an actor with Sunshine Music Tours and Travels in 2016. He started his career in the entertainment industry as an assistant director. The actor has a few films to his credit, such as Gold, Bhangra Paa Le, and Shiddat. He has also appeared in a few music videos- Taaron Ke Shehar, Dil Lauta Do, and Ishq Mein. He will next be seen with Neetu Kapoor and Shraddha Srinath in an untitled film.