Richa Chadha, best known for her roles in the Fukrey and Gangs of Wasseypur films, is currently making headlines for the wrong reasons.

On Wednesday, the actress took to social media and reacted to the statement of the Northern Army Commander Lt General Upendra Dwivedi that the Indian Army is prepared to carry out any instructions to get Pakistan-occupied Kashmir (PoK) back. Lt. General Dwivedi said this in reaction to the Defence Minister's earlier speech, in which he reaffirmed New Delhi's determination to take back Pakistan-occupied Kashmir (PoK), promising that all refugees will regain their homes and lands. 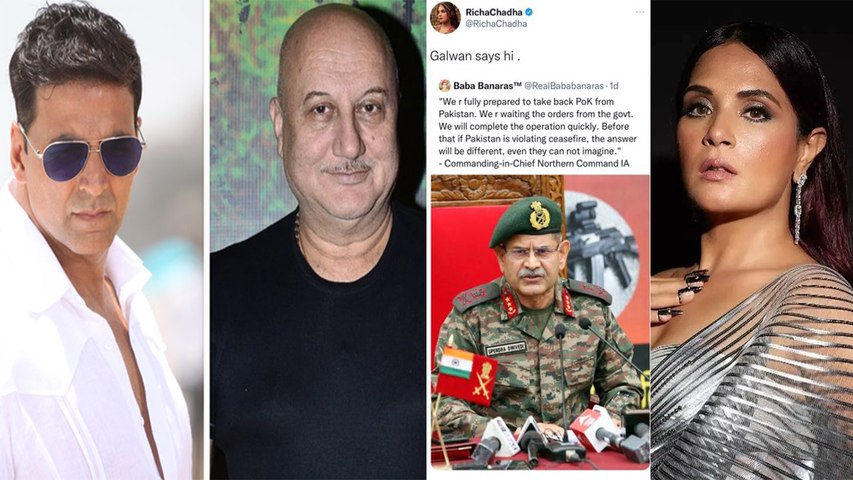 Lt General Dwivedi stated, "As far as the Indian Army is concerned, it will carry out any order given by the Government of India. Whenever such orders are given, we will always be ready for it."

Reacting to it, Richa tweeted, "Galwan says hi." Ever since then, she has been getting slammed for allegedly insulting the Indian Army by referring to the 2020 clash between India and China. Later, she issued a public apology and stated that her intention wasn't to hurt anybody.

Not just social media users, several well-known celebrities too criticised Richa Chadha's comment and Bollywood superstar Akshay Kumar is one of them.

In reply to the actress' tweet, the Sooryavanshi star wrote, "Hurts to see this. Nothing ever should make us ungrateful towards our armed forces. Woh hain toh aaj hum hain."

In the latest turn of events, South star Prakash Raj has come out it Richa's support and slammed Akshay Kumar's post against her.

Taking to Twitter, Prakash took a dig at the superstar and tweeted, "Didnt expect this from you @akshaykumar..having said that @RichaChadha is more relevant to our country than you sir. #justasking."

In another post, he stated, "Yes we stand with you @RichaChadha... we understand what you meant."

While Prakash Raj's posts have been receiving a mixed response, Akshay's fans have been trolling him for attacking their idol on social media who's come out in the support of the Indian Army. Reacting to it, a Twitter user wrote, "Shame On You @prakashraaj... Staying in India You Questioning that Person Who Always Respects and Stands For Indian Army"

Another social media user tweeted, "1st see the income tax paid by both to the country in last 10 yrs...Then you will automatically know who is more relevant... FYI, @akshaykumar is more relevant to our country than you, as well"

A third comment reads, "So you're supporting the mockery of martyrs of Indian army by Richa Chadha? Akshay did wrong that he came out in support of the Indian Army? And yes Akshay is far more relevant to our country than both of you."

Here are the reactions:

For the unversed, Akshay and Prakash Raj shared screen space in several films including Gabbar Is Back and Entertainment. It'll be interesting to see how the Rustom actor would react to the comment made against him.