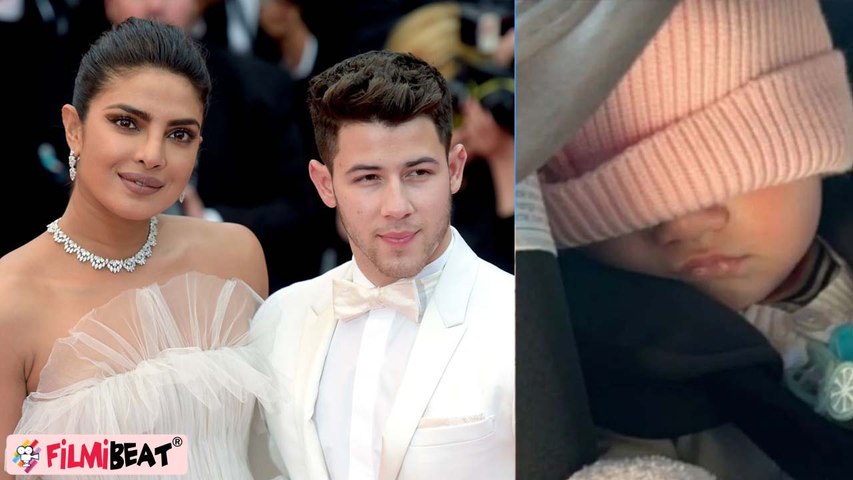 Global star Priyanka Chopra got married to American singer Nick Jonas in a grand Christian and Hindu ceremony in Jodhpur's Umaid Bhawan Palace in 2018 amid close family and friends. Later, the couple hosted two lavish receptions in Mumbai and Delhi. In January 2022, Priyanka and Nick announced the birth of their first child, Malti Marie Chopra Jonas, via surrogacy. And since then, everybody has eagerly awaited a glimpse of Priyanka's tiny tot.

Priyanka Chopra is back with her family in LA after spending some quality time in her Mumbai home. The actress will be celebrating Christmas with Malti for the first time. The actress usually keeps treating her fans to her daughter's cute glimpses, and in the latest one, the star has revealed Malti's half face.

In the early hours of Wednesday (November 23), Priyanka took to Instagram and dropped an adorable pic of her little baby, in which she is dolled up in soft layers while her eyes are covered with a warm pink woollen cap. We can only see half of her face. Sharing the snap, Priyanka captioned her Instagram Story, "I mean...," followed by a couple of heart-eye emoticons.


Malti's picture was shared by one of Priyanka's fan accounts on Instagram. Fans rushed to shower their love on the toddler; however, they began a debate in the comment section as to whom Malti Marie resembles. One fan said, "Awwe finally ...such a pretty kiddo." Another person's comment read, "Beautiful princess." "She's such a cutie," read an Instagram comment. "Malti Marie so beautiful I just love her," another wrote, "If you look at her closely, she got Nick's lips," said another fan.

Malti Marie's photos go instantly viral on social media as soon as Pryanka shares them. The actress and Nick recently celebrated their first Diwali with Malti, along with Priyanka's mother Madhu Chopra and other family members, at their LA house.

Priyanka Chopra is one of the busiest actresses in the industry, working in both Bollywood and Hollywood simultaneously. Meanwhile, she is the most-followed celebrity on Instagram, with over 83.6 million followers.

Workwise, Priyanka Chopra has a bunch of interesting Hollywood projects in her kitty. She will be seen in American Love Again alongside actors Sam Heughan and Celine Dion. She also has the Russo Brothers thriller series Citadel opposite Richard Madden, It's All Coming Back To Me, and Ending Things. In Bollywood, the actress will be seen sharing the screen with Alia Bhatt and Katrina Kaif in Farhan Akhtar's Jee Le Zaraa. The film will reportedly go on the floor soon.