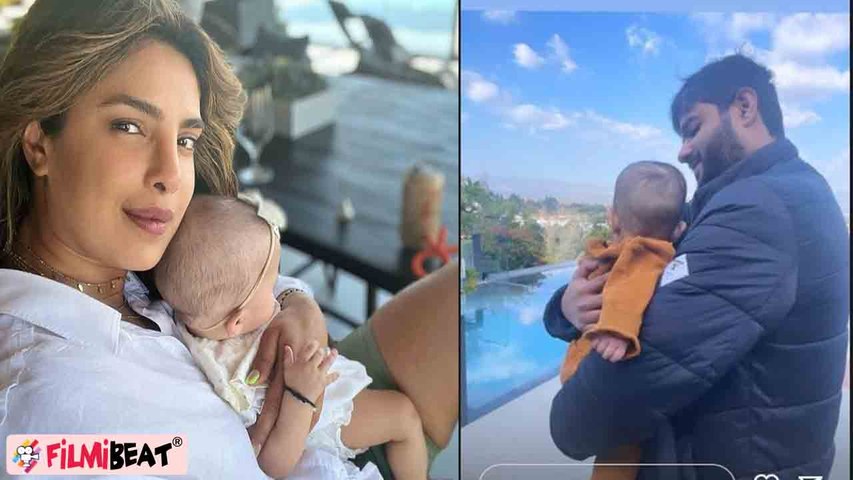 Global star Priyanka Chopra and her husband Nick Jonas will be celebrating their fourth wedding anniversary in December. Chopra and Nick tied the knot in 2018 amid close family and friends. The couple in January announced that they have welcomed their daughter via surrogacy, whom they named Malti Marie. The actress keeps sharing her little munchkin's glimpses from time to time; however, they're usually covered.

Chopra on Wednesday (November 30) morning, shared yet another photo of Malti Marie with her mama Siddharth Chopra. The adorable picture shows Siddharth holding little Malti in his arms while looking at her adorably. This happens to be the first picture of Malti Marie with her uncle, shared by her muma Priyanka. Meanwhile, Priyanka Chopra could stop gushing at them. On her Instagram Stories, Priyanka along with the photo, wrote, "Aww...My heart", followed by a heart emoji.

Take a look at the photo below:-

Looking at the picture, it seems that it was taken at PeeCee and Nick's LA mansion, where Malti and Siddharth are standing in the backyard of their home, where the sprawling pool is visible.

A few days ago, Priyanka shared the first glimpse of Malti's face without covering it. The actress visited India earlier in November, after three years. She was in Mumbai to promote her haircare brand, Anomaly. The actress after her marriage with singer Nick Jonas has been living in the US and used to visit her homeland India frequently. However, due to the pandemic restrictions, Priyanka could not make time to come to India.

Talking about Priyanka Chopra's professional front, she has a line of interesting international projects in her kitty. Chopra has the Russo Brothers sci-fi thriller series, Citadel. She has signed two Hollywood films, It's All Coming Back To Me and a musical Love Again, a musical, co-starring Sam Heughan and Celine Dion. In Bollywood, Priyanka will be seen in the Farhan Akhtar-directed Jee Le Zaraa, alongside Katrina Kaif and Alia Bhatt.