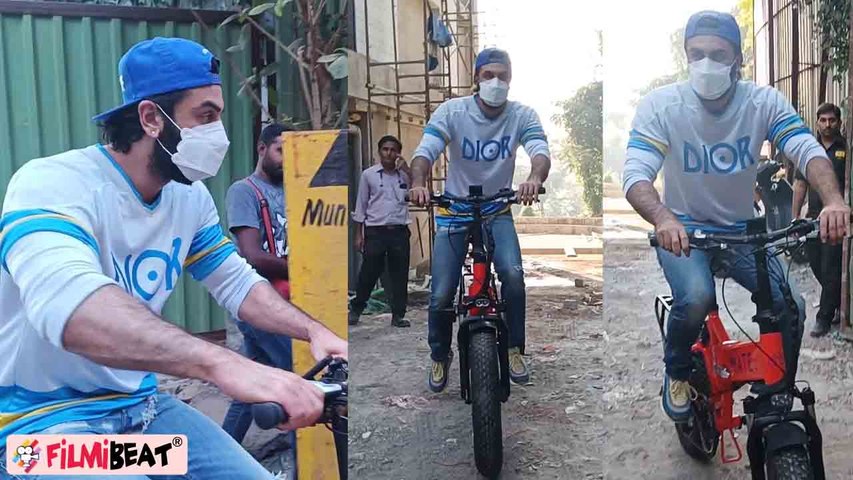 Ranbir Kapoor has been all over the headlines these days on both personal and professional life. The handsome hunk, who has been married to Alia Bhatt since April this year, embrace fatherhood for the first time early this month. The power couple has been blessed with a baby girl and they have been over the moon ever since. Interestingly, there were reports that Ranbir will be taking a paternity leave post the arrival of his baby girl. However, the Ajab Prem Ki Ghazab Kahani actor resumed work soon after his daughter's birth. Recently, Ranbir and Alia also took the social media by a storm as they announced their princess' name as Raha which means freedom, bliss and peace.

And now, Ranbir is once again making the headlines as he was papped in the city today. The Brahmastra actor was seen exuding charm in a casuals and was seen riding a swanky an electronic bike as he visited his under construction house at Pali Hill. In the pics, Ranbir was seen wearing an icy blue coloured sweatshirt with yellow and blue stripes which he had paired with denims, a blue cap and a pair of stylish sneakers. He made sure to wear a mask as he stepped out in public. However, it was his stunning red MATE X foldable E-bike from a Copenhagen company that grab the eyeballs. But did you know, this swanky e-bike costs a bomb? According to media reports, this uber-cool electric bike is worth Rs Rs 1.45 lakhs.

Meanwhile, talking about the work front, Ranbir is currently working on Sandeep Reddy Vanga's upcoming movie Animal which also features Rashmika Mandanna and Anil Kapoor in the lead. Talking about the movie, he stated, "It's quite a shocking character and has got a lot of grey shades to it. That's a script that's way out of my comfort zone. I am scared, but at the same time very excited". The movie will mark Ranbir's first collaboration with Rashmika and fans are quite excited to see this fresh pair. Besides, he will also be seen collaborating with Shraddha Kapoor for the first time in Luv Ranjan's yet to be titled romantic comedy.