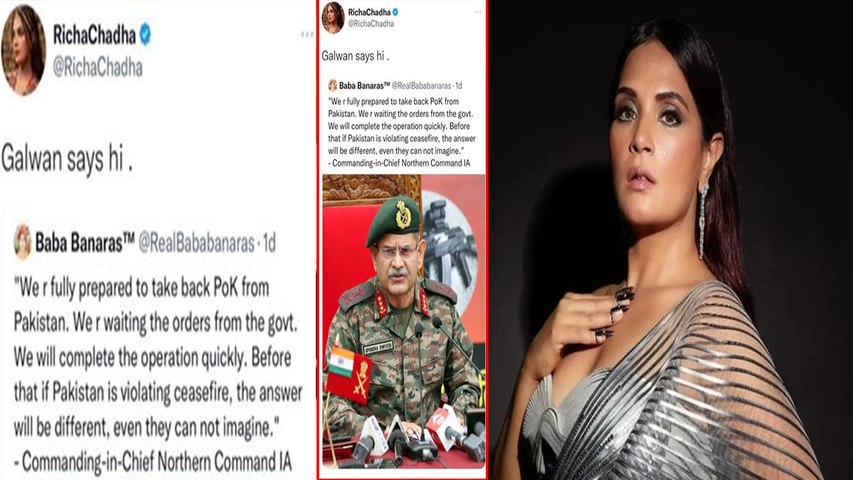 Bollywood actress Richa Chadha has come under heavy criticism after her tweet about Galwan went viral on social media. She issued a public apology after receiving huge flak and later deleted the controversial comment that appeared as a mockery of a top army commander's statement about taking back Pakistan-occupied Kashmir (PoK), referring to the Galwan skirmish with Chinese troops in 2020.

The actress's tweet, "Galwan says hi," backfired and was severely trolled on the internet. Several social media users and BJP ministers slammed her, while many questioned her patriotism towards the country. Meanwhile, her tweet was tagged as offensive and a humiliation to those soldiers who sacrificed their lives in the 2020 Galwan Valley clash.

Further, BJP leaders claimed that Richa Chadha is affiliated with the Congress and referred to her as a third-rate actor. Demanding legal action, the BJP's Manjinder Singh Sirsa said, "Disgraceful tweet. Should be withdrawn at the earliest. Insulting our armed forces is not justified."

On the other hand, Richa Chadha issued a statement apologising for her tweet. She wrote, "Even though it can never be my intention in the least, if the 3 words which are being dragged into a controversy have offended or hurt anyone, I apologise and also say that it would sadden me if even unintentionally my words have triggered this feeling in my brothers in the fauj (army) of which my own Nanaji has been an illustrious part."

She mentioned in her apology post that her grandfather was a "Lieutenant Colonel", who took a bullet in the leg in the Indo-China war. "My Mamaji was a paratrooper. It's in my blood. A whole family is affected when a son is martyred or even injured while saving the nation which is made up of people like us and I personally know how it feels. It is an emotive issue for me," she said.

Meanwhile, users on social media called out Richa for ridiculing the Indian Army. One user said, "'Galwan says hi' writes Richa Chadha in response to a statement by a commanding officer on POK. Disrespecting those who gave their lives for India. Mocking the Indian army. She proves once again there is no limit to how low this industry can sink. A boycott is all they are worth," while another user wrote, "Mocking the sacrifice of our soldiers at Galwan valley. Shameful & disgraceful."

For the initiated, around 20 Indian soldiers died fighting Chinese troops in the Galwan Valley, which took place in June 2020. In the clash, 40 Chinese soldiers were put to death and injured.