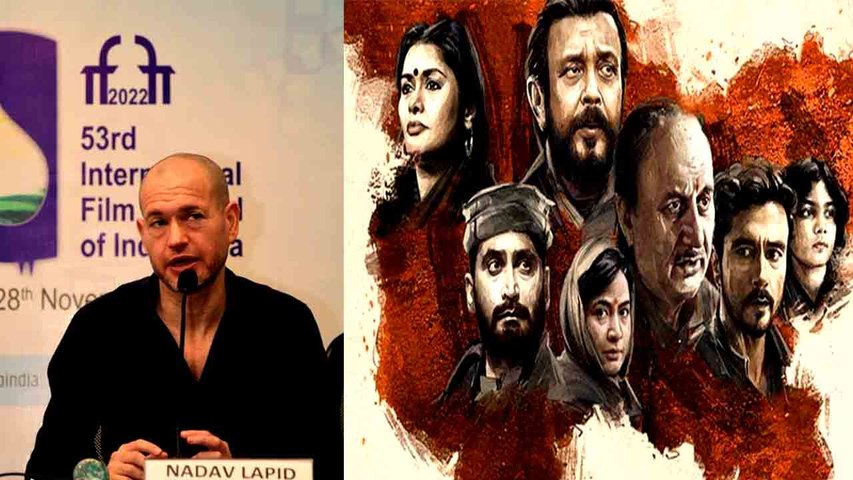 Filmmaker Vivek Agnihotri's The Kashmir Files, featuring Anupam Kher, Mithun Chakraborty, and Darshan Kumar among others in pivotal roles, was released earlier this year in the theatres and turned out to be a huge box office hit.

Based on the 1990s exodus of Kashmiri Hindus from Indian-administered Kashmir, the film received a mixed response from moviegoers and sparked debates with a section calling it a 'propaganda' film.

Months after its release, The Kashmir Files once again made it to the headlines on Monday (November 28) after Israeli filmmaker Nadav Lapid described it as "vulgar" and "propaganda". Lapid made these remarks during the Goa closing ceremony of the 53rd International Film Festival of India (IFFI). For the unversed, he is a part of the festival's jury.

Talking about the film, the jury chairman of the International Competition section of IFFI said, "There were 15 films in the international competition - the front window of the festival. Fourteen out of them had the cinematic qualities... and evoked vivid discussions. We were, all of us, disturbed and shocked by the 15th film, The Kashmir Files. That felt to us like a propaganda, vulgar movie, inappropriate for an artistic competitive section of such a prestigious film festival."

While his statement sparked intense reactions on social media, Israel's ambassador to India Naor Gilon too has now slammed him in a series of tweets.

Taking to social media, the Israeli envoy accused Lapid of abusing the confidence placed in him by India by criticising The Kashmir Files and the invitation extended to him to preside over the IFFI Goa jury panel.

Gilon tweeted, "An open letter to #NadavLapid following his criticism of #KashmirFiles. It's not in Hebrew because I wanted our Indian brothers and sisters to be able to understand. It is also relatively long so I'll give you the bottom line first. YOU SHOULD BE ASHAMED."

Gilon reprimanded Lapid and highlighted the strength of the friendship between India and Israel, saying it will endure the harm caused by him. The Israeli convoy even apologised to India and called the filmmaker's comments 'insensitive'.

The Israeli convoy tweeted, "I'm no film expert but I do know that it's insensitive and presumptuous to speak about historic events before deeply studying them and which are an open wound in India because many of the involved are still around and still paying a price."

He further wrote, "The friendship between the people and the states of India and Israel is very strong and will survive the damage you have inflicted. As a human being I feel ashamed and want to apologize to our hosts for the bad manner in which we repaid them for their generosity and friendship."

An open letter to #NadavLapid following his criticism of #KashmirFiles. It’s not in Hebrew because I wanted our Indian brothers and sisters to be able to understand. It is also relatively long so I’ll give you the bottom line first. YOU SHOULD BE ASHAMED. Here’s why: pic.twitter.com/8YpSQGMXIR