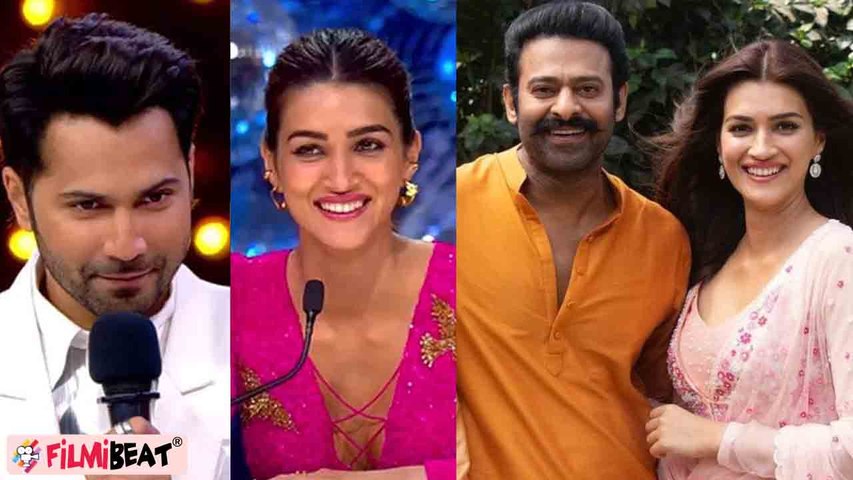 Kriti Sanon is currently in high spirits as her recently released film Bhediya has been receiving positive reviews from audiences. Her Bhediya co-star Varun Dhawan and Kriti Sanon, have extensively promoted their film. The two stars share a beautiful bond on and off screen, as both are often seen teasing each other and exchanging fun repartee.

The actors recently promoted their film Bhediya on the dance reality show Jhalak Dikhhla Jaa 10, and a video clip from the show has been making the rounds on social media. While having an amusing banter with one of the show's judges, Karan Johar, Varun seemed to have tipped off some details about Kriti Sanon's love life. In the video, Varun is seen hinting at the budding romance between Kriti and Prabhas.

In the viral video, Karan Johar is seen asking Varun Dhawan on the set of Jhalak Dikhhla Jaa about some lists and why Kriti is not on them. Apparently, Varun seems to have confirmed that Kriti might be dating someone, and that the person is not from Mumbai and at present is shooting with actress Deepika Padukone. Replying to Karan, Varun said, "Kriti ka naam isiliye nahi tha kyunki Kriti ka naam..."

Kriti then intrudes, however, Varun continues and reveals, "kisi ke dil me hai." Karan then goes on to ask Varun to reveal the name. He is heard saying, "Ek aadmi hai jo Mumbai me nahi hai, vo iss waqt shooting kar raha hai Deepika (Padukone) ke saath." It is quite apparent that Varun Dhawan is signalling at Prabhas as he is currently filming his next movie, Project K, with Deepika Padukone. Varun's revelation left Kriti blushing.

Kriti Sanon and Prabhas will soon be seen sharing the big screen in Om Raut's Adipurush, which is set to release next year. And rumours have been circulating in the media that both actors are very much in love and dating each other. Their lovely bond was also seen at the film's trailer launch event, and now Varun Dhawan's statement has added extra fuel to the rumours.

Kriti too sparked headlines in a recent interview with India Today when she was asked if she would marry, flirt with, or date Kartik Aaryan, Tiger Shroff, and Prabhas. She had responded, saying, "I would flirt with Kartik, date Tiger, and would rather get married to Prabhas." All these have caused much excitement amongst the fans, as they were seen dropping red heart emoticons in the comment section.

Speaking of Adipurush, the epic drama also stars Saif Ali Khan and Sunny Singh in pivotal roles. Apart from Adipurush, Prabhas also has Prashanth Neel's Salaar and Project K, helmed by Nag Ashwin. Kriti Sanon, on the other hand, will be seen with Kartik Aaryan in Shehzada and in Ganapath opposite Tiger Shroff.