Every genuine and real-life story in this world ends in two different ways, one happy and the other sad. Being the optimistic kind, we always hope and wish for a happy ending, and this concept is what the film industry feeds on. Most of our masala Bollywood entertainers pretty much always have a happy ending so as to keep the audience happy, while the person exits from the theatre. This Saif Ali Khan's movie deals with exactly that.

The film starts off with Yudi (Saif Ali Khan) and Kareena sipping coke in the theatre when she utters the dreaded four letter word (Love) which makes Yudi squirm. Kareena's exit leads to Yudi's intro song, which describes his rich lifestyle in Los Angeles. This is Yudi's story, he is a flamboyant author who has hit a creative roadblock after the success of his first novel.

It's been a few years he has written anything and is busy living the life and dating girls, leaving us with one question. When did writing one book generate so much of wealth? Anyways Bollywood movies are far from real so moving on, we have Yudi enjoying his wealth carelessly till one day when his books are no longer available in any store and he has to do something in order to earn money and get back to his royal life because his precious car got towed away.

In the process of finding other ways to make a living, he is left with one and only option, to help a fading superstar Armaan (Govinda). He comes to Hollywood to get a Bollywood script written as a desperate attempt to save his stardom in the film industry. 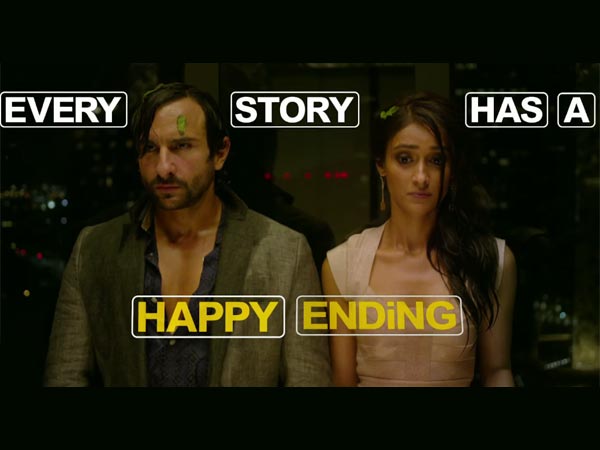 During his desperate time, he comes across Aanchal (Ileana D'Cruz) who is the latest writer star on the block who has replaced Yudi. Initially, they meet as rivals, but very soon they realize that they are not that different from each other. They are both strong-minded people who are cynical about love. Together, they set out on a journey to find his inspiration for the movie. Their one-night stand turns serious and what follows next forms the crux of the story.

Saif Ali Khan is good in both the roles he has essayed in the movie, one as Yudi and the other cameo role as Yogi. His role of the spolit rich brat or stud as he calls himself is somewhat close to what he has played in Cokctail, but in this film, his performance is a bit more crisp. Ileana has given a decent performance as the fun, care-free Aanchal, but the true star is Govinda who shows us why he is the true comedy king of Bollywood. Certain scenes of the actors are simply hilarious.

Kalki Koechlin will be seen as Yudi's stalker ex-girlfriend and there is no need of mentioning how good she is for she has always been a brilliant performer. Ranvir Shorey who plays Yudi's friend's role too displays great comic timing, but unfortunately he has very less screen time. Ileana D'Cruz's boyfriend Andrew Kneebone is making a guest appearance in the movie, even though he is not an actor by profession, so try to spot him people.

Preity Zinta and Kareena Kapoor Khan who are seen in cameo roles in the movie have done the best they can with the roles offered to them. But preity has an extended role and is like a breath of fresh air. The main USP of the film is its music, the songs are really catchy and are in perfect sync with the situations, so kudos to Sachin-Jigar for giving us some mesmerizing and soulful songs like Jaise Mera Tu and Mileya Mileya. Amitabh Bhattacharya's lyrics too are perfect for the feel of the songs.

Coming to the main people behind this movie, directors Raj Nidimoru and Krishna D.K. have done a good job in direction, but the execution of the script could have been a lot better. Happy Ending entertains, but a crispier story and a generous sprinkling of humour would have added more fun.

Somewhere down the line, you realize that Happy Ending is exactly what they are making fun of in the movie.

Happy Ending is not a bad movie, it just could have been better. It is a decent watch that'll offer you some laughs here and there with some popcorn and coke. Happy Ending makes for a watchable movie. We promise, if not a huge LOL, you'll at least have a smile on your face throughout the movie.

See who and what to watch for in the movie...

Saif Ali Khan as the flamboyant author whose only way to earn money now, is by helping a fading superstar with a superhit Bollywood script.

Ileana as the writer who changes the crux of the story. Will the two fall in love with each other? Now that is the question.

Govinda as the fading superstar who wants to get a super script so as to reach stardom again.

Kalki as the ex-girlfriend. She has performed brilliantly in this movie, after Govinda, she really stands out with her performance.

Ranvir Shorey will be seen as Saif's friend and his performance is brilliant as usual and you only wish he had more screen time.

Yogi is a complete contrast of Saif's character, he is witty, funny and hilarious. This cameo role is truly worth the watch.

Kareena Kapoor and Saif start the movie, though they are husband and wife in real life their portrayal of a couple breaking up is brilliant.

It's been ages we have seen her on-screen, so do watch out for Preity Zinta as one of Saif's ex-girlfriends.

Watch out for the songs, each song is different and addictive but Jaise Mera Tu is the chart-topper that you can't stop listening to.

Well, each person has a different feeling about this pairing, some like it, some don't. Let us know if you like their pair.