Dilwale has released worldwide and the D-day has finally arrived when all you viewers can see this what this extremely hyped movie is all about. This Rohit Shetty directorial has been making news from day one, from casting Shahrukh Khan as main lead, to bringing back SRK-Kajol together after a huge gap of 5 years and finally its' big clash with Bajirao Mastani.

The last time Shahrukh Khan and Sanjay Leela Bhansali had a Box Office clash with Om Shanti Om and Saawariya, the former won fair and square with a much better movie that entertained the viewers and marked the debut of beauty, Deepika Padukone.

Coincidentally, the actress who was on SRK's side during the first clash is going up against him and is siding with Sanjay in the second clash. SRK's former actress is playing the leading role in Bajirao Mastani with her beau, Ranveer Singh with whom she shares a magical chemistry much like Shahrukh Khan-Kajol!

So which pair will set the screen on fire? Is Dilwale worth all that hype? Is Dilwale 2015's biggest hit! Read on to find out!

The movie revolves around two warring gangster clans in Bulgaria! Randhir Bakshi (Vinod Khanna) is an Indian don who is constantly warring with his once friend now foe, Malik (Kabir Bedi)! Raj (Shahrukh Khan) is the adopted son of Randhir who is his ace in this clan war and owing to him he manages ti win flick all the gold from Malik. Raj is seen doing all kinds of desi version of Fast and Furious stunts and looks rather cool. A whole lot of car chases, death defying stunts, gun wielding action to steal gold from the rival.

He is a mean machine who can do just about anything till he comes across Meera (Kajol) and suddenly, Raj goes from mean machine to a softie, only problem, he doesn't know her real identity.

SPECIAL SCREENING PICS OF DILWALE MOVIE
A whole lot of romance, gerua (colour me in the colour of love), flowers, candle light dinners and all possible cliched love scenes take place but the fact that it is Shahrukh Khan and Kajol enacting them, somehow makes these scenes very intense and engaging.

After some betrayal and patch up, Raj and Meera make their relationship work, only to be further ruined by a big betrayal from her own clan which leads to their separation. This forms the 15 years of flashback that Raj never reveals to Veer (Varun Dhawan).

Presently, the brothers run a rather successful car modifying garage and all is going well till he falls for the pretty damsel Ishita (Kriti Sanon) who by fate happens to be Meera's younger sister.

The 15 years of flashback are shown in parts as and when Raj remembers his past and his one true love! How will Veer and Ishita make their relationship work? Will Raj and Meera bury the hatchet? What exactly happened between Raj and Meera that has made the latter hate him? To get your answers, you ought to watch the movie. 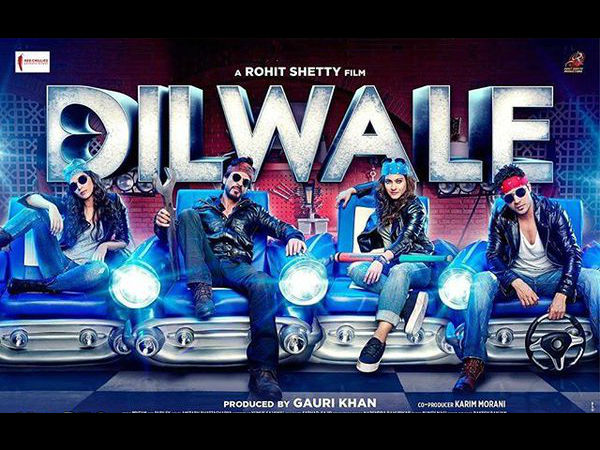 Like expected, Shahrukh-Kajol's chemistry is simply breathtaking and one of the most engaging element of the movie. Without them, Dilwale would not have been a great movie! Varun and Kriti's chemistry is cute but it doesn't come up to the level of the big experts of romance.

Kajol has never looked better and she can easily give the youngsters a run for their money. Varun's comic timing is pretty good and Kriti has managed to get noticed in this ensemble cast movie, which is commendable.

Comic actors like Johnny Lever, Varun Sharma, Boman Irani, Sanjay Mishra etc deserve major applause for they make you laugh, you may not be rolling on the floor laughing but the jokes are super funny. These actors were really pivotal to Dilwale for every time there is a dip in the movie, these guys bring it back up with their brilliant performance.

Rohit Shetty, for his level and type of direction has given a rather entertaining, paisa vasool kind of movie with cinematographer Dudley stealing the show with his picturesque frames.

As entertaining as this movie is, there are a few negative aspects!

As much as there are flaws, Dilwale keeps you engaged all 3 hours!

Dilwale is great one time watch! A paisa vasool entertainer that witnessed whistles in the theater throughout! Viewers were seen clapping when the movie ended which shows that Dilwale may not be an iconic classic like Bajirao Mastani but SRK and cast will entertain you, especially if you are a Shahrukh Khan fan!

Kajol is flawless in the movie! Her looks could kill you, she looks that gorgeous and her character shades have also been enacted well.

Shahrukh Khan is Shahrukh Khan! The actor manages to get away with just about anything! He romances well, his comic timing is great and he fights awesome too!

Varun Dhawan has shown his comic side more in Dilwale and he manages to tickle your funny bones.

While SRK-Kajol are the true stars in the move, there is enough screen time for Varun and other actors to make their presence felt. While Kriti has good screen time, her role is not that great, it has no shades and scope for acting.

Shahrukh Khan and Kajol's chemistry is just too intense and the duo look like real lovers on screen.

Rohit can't take any credit for story because it is the same old wine in a new bottle but we can sure praise him for the way he has presented the movie.

Comedy scenes are pretty good, while they don't make you laugh rolling on the floor but they do manage to make you chuckle a little.

Songs are the highlight, every song is perfect and addictive!

Not competition with Bajirao Mastani but nonetheless paisa vasool entertaining.