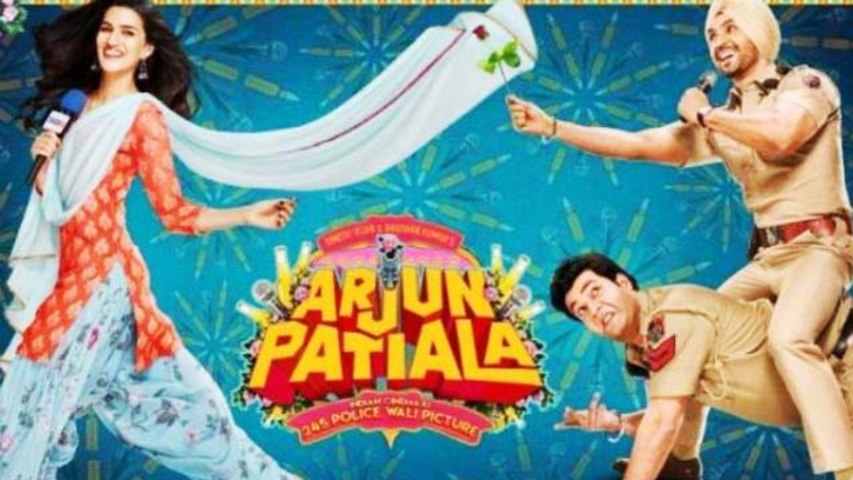 Just before the end-credits start rolling, a character on the screen asks another, "Kya lagta hai aapko, chalegi yeh film?" To which, the latter brushes off her query and advises her not to be a critic. Well, we certainly got that 'subtle' hint there!

To begin with, Arjun Patiala (Diljit Dosanjh) dreams of joining the police force and ends up being one through sports quota. Together with his goofy side-kick, Onida Singh (Varun Sharma), the 'cute' police-officer aims to accomplish the mission of making the town of Ferozpur crime-free from goons like Sakool (Mohammed Zeeshan Ayyub). Meanwhile, there's more to MLA Prapti Makkad (Seema Pahwa) than meets the eye.

When not nabbing criminals, Arjun indulges in some 'aashiqui' with an investigative journalist Ritu (Kriti Sanon).

All these ain't real people. Instead, they are characters in a film within the film which is being narrated by an aspiring director (Abhishek Banerjee) to a producer (Pankaj Tripathi).

'Arjun Patiala' attempts to be a spoof comedy. But, it's bland and ridiculous and barely makes you laugh. The jokes are the ones which you have already seen in the trailer and the plot is flimsy as a paper. Rohit Jugraj's direction barely hits the bull's eye. While the first half of Arjun Patiala does have a few ha-ha moments, the film completely loses its plot post interval.

Diljit Dosanjh is likable with his vulnerability and low-charm. Kriti Sanon is fiesty in places, but the weak script barely gives her any scope to perform. Varun Sharma delivers his quota of comedy with ease. But we have seen him do that in his previous flicks as well.

Mohammed Zeeshan, Seema Pahwa and Ronit Roy suffer from lacklustre writing. Sunny Leone's cameo is as forgetable as her mandatory item song in the film.

The film's cinematography and editing has nothing new to offer. Barring 'Main Deewana Tera', none of the songs leave a mark.

Diljit Dosanjh-Kriti Sanon-Varun Sharma starrer 'Arjun Patiala' fails to tick all the boxes when it comes to an enjoyable fare. With mediocre execution and wafer-thin script, the joke is on the makers here! I am going with 2 stars.