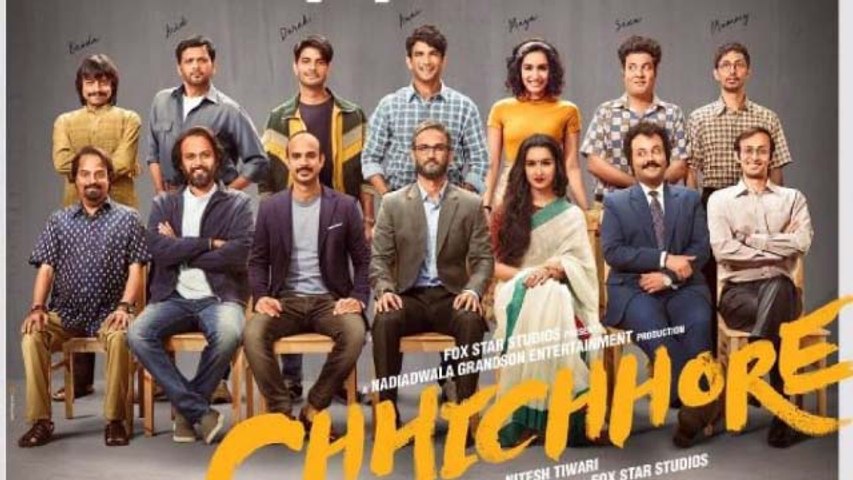 'We all have our plans ready for the journey after being successful at something. But nobody ever talks about how to deal with failures,' says Ani (Sushant Singh Rajput) and breaks down. His teenaged son Raghav is battling between life and death in the hospital after a suicide attempt as he failed to crack the engineering entrance exam. Nitesh Tiwari's Chhichhore borrows heavily from the real world.

Aniruddh aka Ani (Sushant Singh Rajput)'s world comes crashing down after his son attempts to kill himself post failing to clear an exam. When the dejected kid gives up all hope to live, Ani sends a distress call to his closest buddies from his engineering days.

Together with his estranged wife Maya (Shraddha Kapoor) and his best buddies, he walks down the memory lane and narrates to his son how they were a gang of 'losers' who would always put their brave chin up in every tough situation.

We are introduced to Ani's engineering days. Smart, charming and the one who has a solution to every problem, our hero is every girl's dream boy. His gang includes porn-addict Sexa (Varun Sharma), foul-mouthed Acid (Navin Polishetty), perpetually-high Bevda ((Saharsh Shukla), geek Mummy (Tushar Pandey) and 'sab ka baap' Derek (Tahir Raj Bhasin).

Often ridiculed as 'losers' on the campus, these boys from Hostel 4 realise that the only way to get rid of this tag is to win the college sports championship. But, it wouldn't be an easy feat. Especially when their opponents are the boys from Hostel 10 led by the tough bully Raggie (Prateik Babbar).

As the film oscillates between the past and the present, the group's unlikely reunion changes Raghav's perspective towards life.

Nitesh Tiwari draws inspiration from his own experiences as a student at IIT Bombay and weaves a story which is laced with emotions, humour and an important life-lesson! While certain portions might remind you of Aamir Khan's '3 Idiots', it's Tiwari's treatment to the plot which lends a distinct flavour to the story-telling.

Even though there are many characters in the film, the director makes sure that each one of them gets their shining moment. On the flip side, 'Chhichore' stumbles a bit when it comes to the writing in the serious present. A few repetitive scenes take some charm off.

Speaking about the performances, Sushant Singh Rajput is a crackler when it comes to his hostel sequences. However, the actor looks a tad uncomfortable when it comes to portraying the older Ani. Shraddha Kapoor makes the most of her role and looks strikingly beautiful in every frame.

Varun Sharma makes you laugh with his impeccable comic-timing and hilarious liners. Naveen Polishetty makes a smashing Bollywood debut. Tushar Panday too leaves you in splits with his innocent act. Saharsh Shukla, Tahir Raj Bhasin and Prateik Babbar pull off their roles well.

Amalendu Chowdhary's cinematography is on point and perfectly captures both the time frames. Charu Shree Roy's editing goes well with the film.

The songs in 'Chhichhore' lend some beautiful moments. However, it's 'Fikar Not' which stands apart from the rest.

'Success is not final; failure is not fatal. It is the courage to continue that counts'. Nitesh Tiwari needs to be applauded for taking up this subject which is relevant in every walk of life. Some heart-tugging moments, plenty of 'haha' and an important life-lesson makes 'Chhichhore' an entertaining watch. I am going with 3.5 stars.