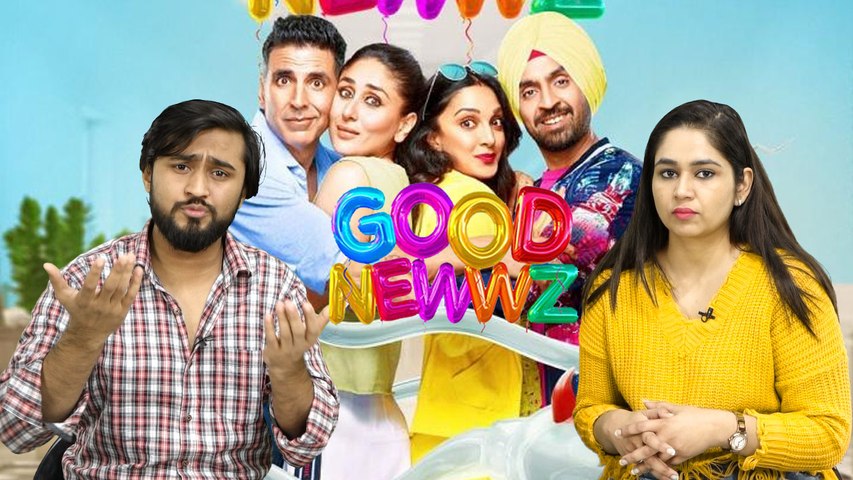 In a scene from this film, while debating over having children, Akshay Kumar's character takes a dig at celebrity couples flaunting their kids on social media. Interestingly, the actor shares this scene with Kareena Kapoor Khan whose son Taimur, barely three, is already an internet sensation in real life.

One of the plus points about Good Newwz is that the film doesn't shy away from making Bollywood references at various points. A character hints at the current fad of remixes while referring to the sperm mix-up and one of the female leads who plays an entertainment journalist, talks about scheduling interviews with Katrina Kaif and Alia Bhatt.

Iconic Moment: One of the most poignant scenes in Good Newwz belong to Kareena Kapoor Khan and Kiara Advani where the two pregnant ladies bond with each other over 'gol gappas', only to realize how maternal instinct overcomes every class and culture divide.

Varun and Deepti Batra (Akshay Kumar and Kareena Kapoor), a posh married Mumbai-based couple are unable to conceive a baby even after seven years of marriage. With her biological clock ticking, Deepti is keen to embrace motherhood so much so that at point, Varun tells her that he too wants to be a father but 'aisa nahi ki bedroom jaate hue aisa lage ki surgical strike ke liye jaa raha hoon'.

Finding all their efforts in vain and constant prodding from the family, the couple finally end up at a high-end IVF clinic run by Dr Joshi and his wife (Adil Hussain and Tisca Chopra) who expertise in delivering 'good news'.

The twist in the tale arrives when after few days of the procedure, Varun and Deepti are told that there's a sperm mix-up with another couple who too are named Batras. (Diljit Dosanjh and Kiara Advani). What follows next is a clash of sensibilities and a journey of laughter and tears between the two couples.

Good Newwz is Raj Mehta's directorial debut and we must say, the man does a good job with it. The filmmaker's breezy treatment to a subject like in vitro fertilization makes the flick highly palatable to a wide section of audience. The witty lines especially in the first half leave you laughing in your seats.

On the flip side, the screenplay loses its sheen at few places and little more effort in the writing post interval would have raised up the entertainment quotient by several notches. Also, a few scenes where the characters talk about the topic of adoption might rub a few in the wrong way.

When it comes to comedy, Akshay Kumar knows how to play his cards well and here too, he is the king of hearts when it comes to tickling the funny bone. The actor excels in the emotional scenes as well.

Kareena Kapoor Khan proves yet again her versatility as a performer. With her alluring charm and formidable acting chops, the actress is an ultimate girl crush and leaves a lasting impression. Her chemistry with Akshay Kumar is one of the highlights of the film.

Diljit Dosanjh as the loud-mouthed Punjabi guy plays his OTT role with comfort and so does Kiara Advani who too, portrays her gullible character sincerely on the big screen.

The rest of the cast including Adil Hussain, Tisca Chopra, Anjana Sukhani and Mohit Raina (in a cameo) lend support to the film.

Jyoti Kapoor, Raj Mehta and Rishabh Sharma's screenplay has its share of ups and downs. Vishnu Rao's cinematography goes well with the theme of the film. Manish More's editing is fine.

In the music department, 'Sauda Khara Khara' and 'Chandigarh Mein' are foot-tapping numbers. 'Laal Ghaghra' is impressive in pieces. 'Maana Dil' and 'Dil Na Jaaneya' make for a heartfelt listen.

When Kareena Kapoor's character in the film discovers about the sperm goof-up, she threatens to sue the doctor and storms out of the room. On the other hand, Kiara's character hesitantly asks, "Hume refund milega?" Thankfully, Good Newwz makes up for a delightful entertainer with its emotions in the right place.