'Panipat ka naam sunke mujhe darr lag raha thha. Aisa lag raha thha ki ab yuddh tal nahi sakta', says Parvati Bai's voiceover (Kriti Sanon) as she goes on to narrate the historic clash between the Marathas and Ahmad Shah Abdali, the king of Afghanistan on the battlefield of Panipat. Finally, when the epic war plays on the big screen, does it leave you mighty impressed? Let's find out here.

What's Yay: Kriti Sanon, Ashutosh Gowariker's depiction of the political climate during that period and the behind-the-scene tactics of a battle.

What's Nay: The slow build-up of the narrative

Iconic Moment: The scene where Kriti Sanon picks up the sword and indulges in some action leaves a mark.

Set in 18th century India, Ashutosh Gowariker's 'Panipat' begins with a glimpse into the valour of Sadashivrao Bhau (Arjun Kapoor), commander-in-chief of the Maratha army as he tactfully defeats the Nizam of Udgir. On returning to Pune after the victory, Nana Saheb Peshwa (Mohnish Bahl) showers him with praises. Meanwhile, Peshwa's wife Gopikabai (Padmini Kolhapure) begins to resent Sadashivrao as she sees the latter as a threat to her son Vishwarao's position as the next Peshwa.

Meanwhile, Najib-Ud-Daula (Mantra), a Rohilla who was a Mughal serviceman forms an alliance with Afghan cheiftain Ahmad Shah Abdali (Sanjay Dutt). He also convinces Shuja-ud-Daula, the Nawab of Oudh to join Abdali's forces against the Marathas.

As the Afghan ruler sets out to conquer the takht of Hindostan, the Maratha Peshwa chooses Sadashiv to crush Abdali's lofty ambitions. What follows next is one of the largest and gruesome battles of the 18th century.

Ashutosh Gowariker's grand vision of translating a chapter from our History textbooks into a cinematic piece is commendable. While the filmmaker does take some creative liberties, he largely sticks to the facts presented in TS Shejwalkar's book 'Panipat 1761'. One of the reasons why 'Panipat' keeps you hooked is because of the director's depiction of the complex politics behind a battle.

Before throwing us into the bloodshed battlefield, Gowariker shows us how allies jumped sides and strategies were made before the Third Battle of Panipat.

On the flip side, the makers take their own sweet time to build the narrative. Also, too much detailing in the first half of the film could be a little difficult for the audience to grasp.

While Arjun Kapoor's sincere efforts to portray the valiant warrior Sadashivrao Bhau is visible in the film, the actor still falls short of giving us even a single 'wow' moment.

Kriti Sanon is the most impressive among the lot as the navari-clad Parvati Bai. The actress lits up the screen every time she enters a scene.

Sanjay Dutt's larger-than-life Ahmad Shah Abdali lacks the volatility and fails to send a chill down the spine.

Zeenat Aman's pale cameo is disappointing. The rest of the cast including Mohnish Bahl, Padmini Kolhapure, Milind Gunhaji, Sahil Salathia, Abhishek Nigam and others fare okay in their roles.

CK Muraleedharan's cinematography captures the lavish scale of the film. However, the well-crafted war scenes lack a novelty factor. Steven Bernand's editing scissors could have easily snipped out some minutes from the film.

Ajay-Atul fail to create magic with 'Mard Maratha' and 'Mann Mein Shiva'. On the other hand, 'Sapna Hai Sach Hai' turns out to be a pleasant surprise with Shreya Ghosal's soothing voice.

"Mor ka Takht aur yeh Kohinoor badi mashakkat se paaya jaata hai... chhinne se nahi milta," thunders Sanjay Dutt's Ahmad Shah Abdali to his assailant in the film. While Ashutosh Gowariker's historical drama may not shine bright as the kohinoor, the director definitely needs a pat on his back for pulling up a history chapter that continues to remain relevant even today. Times have changed but the world we exist in, is still fuelled by power, greed and the lust to have more. I am going with 3 stars. 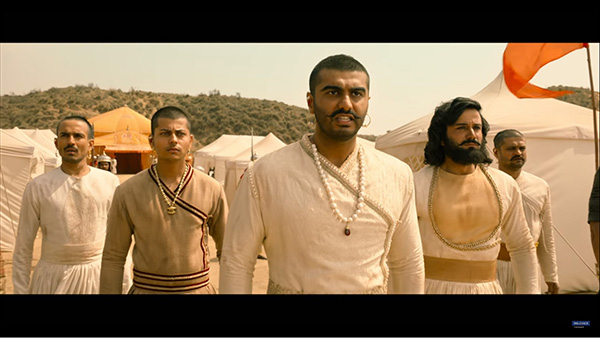