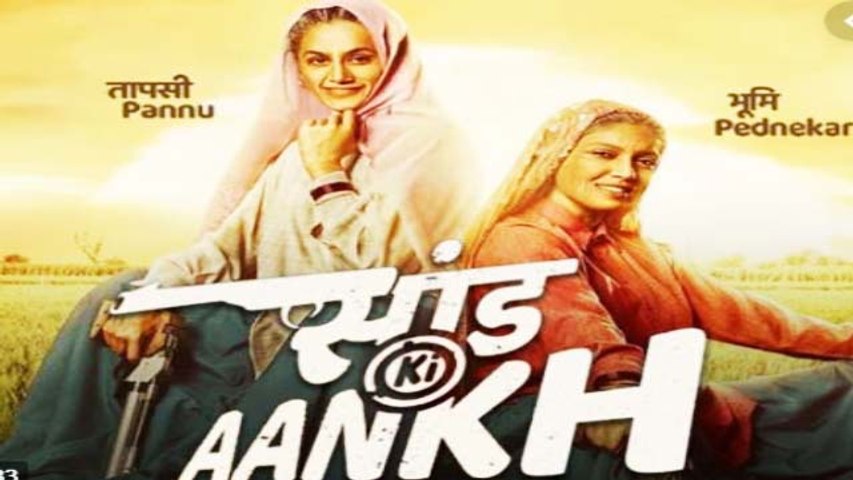 Based on the real-life sexagenarian sharpshooters, Chandro and Prakash Tomar (played by Bhumi Pednekar and Taapsee Pannu respectively), 'Saand Ki Aankh' first gives us a sneak-peek into the lives of these two sister-in-laws when they were newly-married.

The ladies toil hard day and night and are majorly confined to the four walls of their houses. They are covered in ghoonghat all the time and have to colour code their dupattas so that their husbands wouldn't mistake them for one another.

When a doctor-turned-shooting instructor Dr Yashpal (Vineet Singh) sets up a shooting range in the village, Chandro's granddaughter Shefali decides to give it a shot. However once there, it's the former who ends up picking the rifle and hitting a perfect bullseye. Soon, Prakashi too follows her to the range with her daughter Seema.

In a bid to boost Shefali and Seema's morale to excel in the sport, the 'Tomar Daadis' start practising shooting in secrecy with them, keeping the menfolk in dark.

Under the pretense of visiting religious places, Chandro and Prakashi start participating in many shooting competitions and winning medals. What began as an escape from their mundane living, slowly becomes a weapon for them with which they rebel against the patriarchial setup of the society.

Director Tushar Hiranandani's directorial debut is an inspiring tale which stirs up the right emotions in you. Some moments make you laugh a loud, some leave your eyes moist. While the filmmaker sticks to a safe route of story-telling, it's largely effective. The first half of the film is a tad slow but, things brighten up post interval.

Right from the diction to the body language, Taapsee Pannu and Bhumi Pednekar play their roles with gravitas and conviction. Having said that, there are a few scenes where the latter shines a bit more brighter. Meanwhile, the two ladies as 'partners-in-crime' share an amazing camaraderie on screen which is also one of the reasons why 'Saand Ki Aankh' keeps you invested till the end.

Vineet Singh lends ample support to our on-screen 'shooter daadis'. With his punchline, 'Yo toh hona hi thha', Prakash Jha gets you to detest him in his villainy act.

Sudhakar Reddy Yakkanti's cinematography goes well with the palette of the story-telling. Devendra Murdeshwar's editing works fine for the film. On the flip side, the prosthetics department falters as the patchy make-up on Taapsee and Bhumi is a big turn-off.

'Udta Teetar' and 'Baby Gold' stand out in the music album. In times where recreated versions of iconic songs are in vogue, 'Saand Ki Aankh' brings you some refreshing music.

At one point in the film, a character asks the 'Shooter Daadis', "Ek baat bataa Taai...ki khav tum dono? Nishana bilkul sidha lagawo." To which, Prakashi answers, "Gaali". 'Saand Ki Aankh' makes you realise that criticism comes to those who stand out. It's also the best sign that you're onto something. I am going with 3.5 stars.