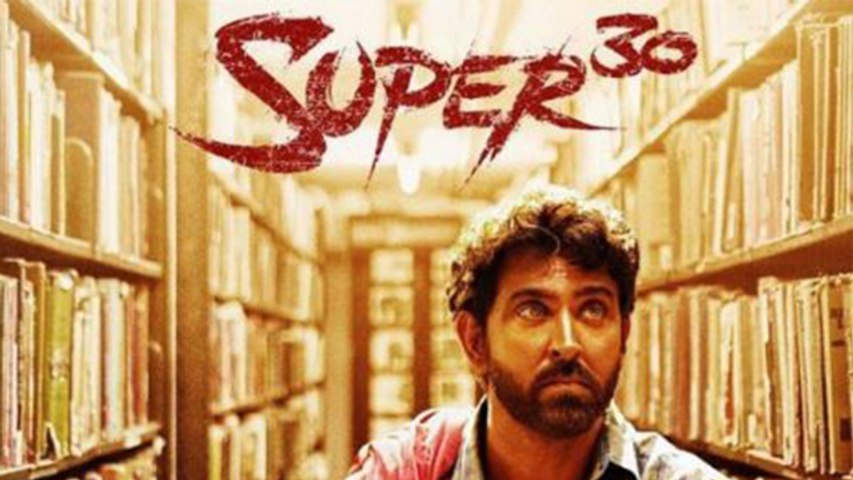 Hrithik Roshan's Anand Kumar does make his students take the leap to victory. Of course, there are a couple of misses as well. But one thing is for sure, this story of triumph amongst all odds leaves you inspired!

Super 30 begins with an international event in London where one of Kumar's former students (Vijay Varma) credits him as the one who changed his life with his guidance. Hitting the flashback button, we are transported to the 90s where we are introduced to a young Anand Kumar as a brilliant student who could do magic with numbers.

The young lad even makes it to the Cambridge University, but is forced to give up the opportunity due to lack of funds. Soon, reality and tragedy strikes and the man ends up choosing a path that's quite different from what he wanted to follow.

However, his conscience pricks him when he is narrated a fable of how Eklavya lost his thumb to Dronacharya so that a king's son remains the champion. It brings him back some memories which are enough to get him into giving free IIT coaching to underprivileged kids. The rest of the film revolves around how Anand and his students brave poverty, hunger and rivalry to become 'Super 30'.

To be honest, when the trailer of 'Super 30' dropped, I wasn't much impressed. However, the film took me by surprise. Based on the real-life Patna based mathematician Anand Kumar, it tells how the man and his batch of students dared to dream big despite the obstacles.

Instead of the controversies in Kumar's life, director Vikas Bahl and writer Sanjeev Dutta choose to focus on his way to glory, the rich-poor divide and how education is the only means to empower the less-privileged. Does it work? Oh yes. However, there are times when it gets a little theatrical. Also, certain creative liberties in the second half dilute the magic.

You have seen Hrithik Roshan do 'dishoom-dishoom' and charm us with his smooth dancing moves on the big screen. Now, watch Bollywood's Greek God minus these two things in 'Super 30'. This time, he has got his emotions to do all the talking.

In the beginning, the actor's Bihari accent does distract you for a while. But as time passes by, you slowly immerse yourself into Anand Kumar's world and things like this become secondary.

Mrunal Thakur is a pleasing sight, but hardly gets a scope to perform because of limited screen time.

Abhijit Shrivastava, Nandish Singh and Virendra Saxena play their parts effectively in the film. Vijay Varma leaves an impression with his brief appearance.

While Amit Sadh gets a clap-worthy scene (Sorry, no spoilers here!), his character in the film looks more like a convenient plot device. Pankaj Tripathi is an absolute delight and leaves you plenty of reasons to laugh.

Anay Goswamy's cinematography perfectly captures the mood of the film. At a runtime of around 2 hours and 40 minutes, Sreekar Prasad's editing could have been a bit more tauter.

Speaking about the music, while the songs flow with the narrative, barring Jugaraafiya and Niyam Ho, none of them linger for long. 'Shiksha' which is used as a background song, at places, leaves you with goosebumps.

Bruce Lee had famously said, "Life is your teacher and you are in constant start of learning." This thought crossed my mind when Hrithik's Anand Kumar tells his brother, "Aapatti se aavishkar ka janm hota hain", in one of the scenes. Despite its set of flaws, Hrithik Roshan's Super 30 still teaches you that every champion was once a contender who refused to give up. I am going with 3 stars.