In one of the scenes in Angrezi Medium, Tarika (Radhika Madan) rebukes her father for unintentionally invading her privacy when she is about to have a moment with her crush. Shocked at her behaviour, her father reveals the purpose of his visit, apologizes and closes the door. The strain in the father-daughter's relationship becomes evident at this point.

What's Yay: Irrfan Khan and his camaraderie with Deepak Dobriyal on screen

What's Nay: Weak narrative, too many sub-plots spoil the show

Iconic Moment: Watch out for the scene where Irrfan Khan's character breaks down in guilt and regret for not doing justice to his deceased wife.

Right from her childhood, Tarika (Radhika Madan) harbours a dream of studying abroad. Initially, her father Champak Bansal (Irrfan Khan), who owns a sweetmeat shop named Ghasitaram, is a bit apprehensive about her 'videshi' plans as he fears losing his daughter. Nevertheless, he throws a challenge at Tarika to earn good grades and secure a scholarship at Truford University in London.

With her hard work and dedication, Tarika passes with flying colours. Unfortunately, Champak inadvertently ends up ruining her opportunity of studying in London. Shattered by this, he takes it upon himself to fulfil his bitiya's ambition by hook or by crook.

Irrfan Khan's 2017 film, Hindi Medium, helmed by Saket Chaudhary, told the story of a middle-class couple's struggle to get their child admitted in a high-profile English Medium school. The film was a sleeper hit at the box office and was applauded for its superlative performances and story.

Three years later, Homi Adajania takes the directorial reins from Chaudhary to churn out its sequel titled as Angrezi Medium. The new film majorly talks about the craze among youngsters to study abroad and how a parent is ready to face the toughest hurdles for his or her child's happiness.

While the film's subject catches your curiosity, Homi Adajania's calculations misfire, especially in the second half, when his sub-plots derail owing to chaos in the narrative.

Irrfan Khan is one of the best things to happen to Angrezi Medium. With his nifty acting skills, he infuses life even in the most lazily-written scene. After his gruelling battle with cancer in real-life, the star is back on his feet and your face lights up when you watch in the first frame itself. He makes you feel each of his emotions as your own.

Radhika Madan, who plays his daughter, holds her own even when she is seen in the same frame as him. The actress brings the right amount of vulnerability and relatability to her character. However in a scene or two, she does falter a bit but then, quickly composes in the nick of time.

Kareena Kapoor Khan is formidable, even when the makers fail to flesh her character. Her track with Dimple Kapadia, who plays her mother, is barely explored. It's heartbreaking to watch such amazing performers being saddled with poorly-sketched characters.

Deepak Doobriyal is a laugh riot and his chemistry with Irrfan keeps your eyes glued to the screen.

Anil Mehta's cinematography captures the colourful town of Udaipur and the hipness of London with the same dexterity. Sreekar Prasad could have snipped the film shorter by a few minutes on the editing table.

Sachin-Jigar's music impresses in parts and pieces. 'Ek Zindagi' is a fast-paced track which motivates you to give wings to your dreams. 'Laadki' gets you sentimental with its heartfelt composition.

While reciting a speech at his daughter's felicitation ceremony, Irrfan's character in his broken English expresses, "Inside I am very emotional and outside I am very happy for my bitiya." The actor makes you feel both these emotions, even when the plot goes haywire at places.

We give 3 stars out of 5 for Irrfan Khan-Radhika Madan-Kareena Kapoor Khan's Angrezi Medium. 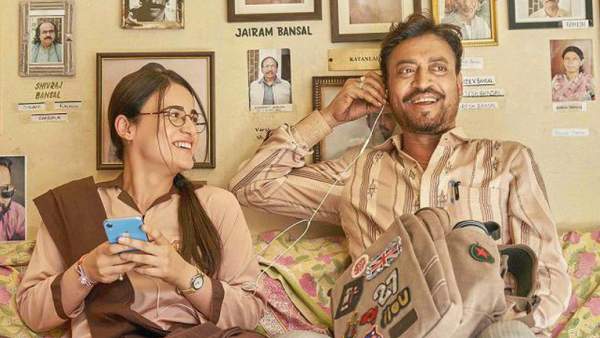