What's Nay: Vidhu Vinod Chopra's clinical approach when it comes to narrating the untold side of the story.

Iconic Moment: One of the best moments in the film arrives in the midst of the end credits where a scene features a bunch of kids staring at Shiv Kumar. On being asked the reason, one of the kids naively quips that they have never seen a Kashmiri Pandit before.

Shikara opens with the main protagonist Dr Shiv Kumar Dhar typing a letter for the President of United States to imbue his feelings as a Kashmiri Pandit. Soon, in flashback, we are introduced to Shiv and his wife Shanti's (Sadia) younger days in the valley of Kashmir.

We get a glimpse into how their blossoming romance culminates into marriage. Things are bright for the Dhar couple. Until they are struck with the horrific exodus of Kashmiri Pandits in January 19, 1990. Left with no other choice, Shiv and Shanti are forced to flee their homeland and seek refuge at a camp in Jammu, with the promise that they will return back to their home in Kashmir some day.

The film is quite close to Vidhu Vinod Chopra's heart since his family was one amongst the many who left the Kashmir valley after Islamists begin to target the Kashmiri Pandits there. While the filmmaker steers clear of melodrama and sensationalism in his story-telling narrative, he fails to bring the untold facet of the horrific evacuation of Kashmiri Pandits.

The clinical approach when it comes to the story-telling fails to create a powerful impact as it should have.

Debutants Aadil Khan and Sadia look confident on the big screen. While the former brings in an intensity-fuelled performance, the latter's infectious smile lits up the screen.

Watch out for the scenes where Sadia's Shanti cooks roghan josh. The first time, her face lits up with joy when she prepares the delicacy in their Srinagar house. However, she sheds some silent tears when she prepares it for the second time in their 'eight by eight' quarter in Jammu refugee camp.

Rangarajan Ramabadran's cinematography beautifully captures the changing landscape and mood of the Valley. Vidhu Vinod Chopra and Shikar Misra's editing could have been tighter.

With the focus more on the lead pair's love story rather than the ordeal of the homeless Kashmiri Pandits post the mass evacuation, Vidhu Vinod Chopra's Shikara ends up as a love letter to Kashmir in faint ink. Further, despite a sluggish pace, it's Aadil Khan and Sadia's matured performances which holds your attention.

We give 3 stars out of 5 for Vidhu Vinod Chopra's Shikara. 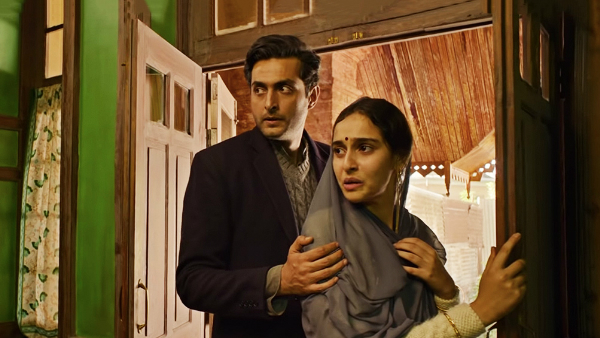