They say Indian society is the most diverse society in the world. Despite having different religions, faiths, ethnicity, languages and cultures, the ancient society has always welcomed new ideas. However, when it comes to accepting relationships, whether it’s inter-caste, inter-religion or same-sex, the people of India are conservative. The newly released Ayushmann Khurrana’s film Shubh Mangal Zyada Saavdhan shows the struggle of a homosexual couple who faces family and society to accept their relationship. Hitesh Kewalya, the writer-director, tries to explain that 'Love is love’, even if it’s between two boys or two girls. 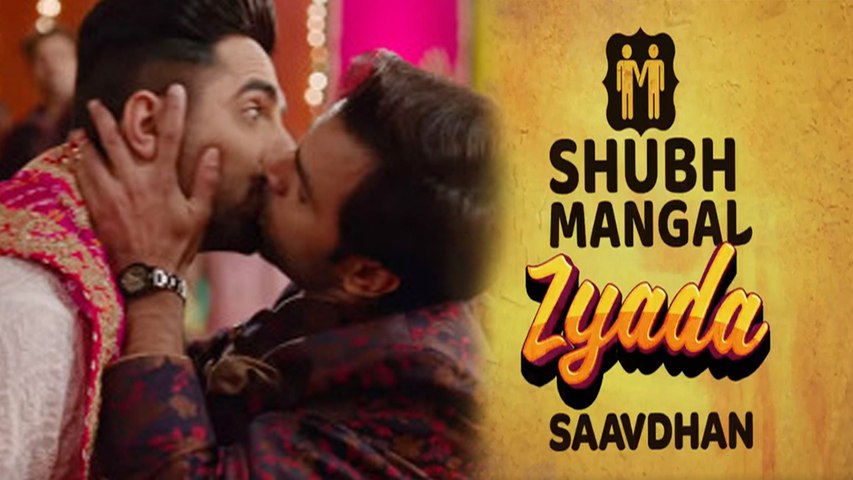 Iconic Moment: There are many.

The film is based in Allahabad where Shankar Tripathi (Gajrao Rao) and his wife Sunaina Tripathi (Neena Gupta), a middle-class couple who is busy in the preparation of their brother Chaman Tripathi (Manurishi Chaddha) and his wife Champa Tripathi (Sunita Rajwar)’s daughter Goggle’s (Maanvi Gagroo) wedding.

Simultaneously, Mr and Mrs Tripathi are also expecting their son Aman (Jitendra Kumar)'s to get married, but he is already in a same-sex relationship with Kartik Singh (Ayushmann Khurrana) in Delhi. The duo comes to attend Goggle’s wedding and while travelling in the train, Shankar Tripathi catches Kartik and Aman kissing each other.

Shocked with the entire scene, Shankar Tripathi and family try hard to take Aman away from Kartik and force him to get married to Kusum (Pankhuri Awasthy). Now, how Aman and Kartik try to convince their family to accept them and what the Tripathi family does to avoid the situation is what forms the remaining Shubh Mangal Zyada Saavdhan.

Shubh Mangal Zyada Saavdhan is the sequel to RS Prasanna’s superhit Bollywood film Shubh Mangal Saavdhan (2017) starring Ayushmann Khurrana and Bhumi Pednekar. The film’s dialogues were written by Hitesh Kewalya who this time took the command of direction and writing for the sequel. Being a first time director, Hitesh has managed to impress with his direction skills. Shubh Mangal Zyada Saavdhan doesn’t bore you for a moment, thanks to his direction and dialogue writing. Hitesh Kewalya’s dialogues are relevant, catchy and funny. His detailed work on every character in the screenplay is praiseworthy.

Ayushmann Khurrana as Kartik impresses us with yet another challenging role of his career. But in some portions, Ayushmann tries to go a bit over the top and his expression looks animated. Shubh Mangal Zyada Saavdhan is not Ayushmann’s best work yet, which we have already seen in Article 15 (2019) and Andhadhun (2018). Jitendra Kumar as Aman looks confused and not confident. Despite having a long and important role, Jitu Bhaiyya fails to create a mark.

Maanvi Gagroo as Goggle is a loud yet interesting character. She has delivered a good performance. Pankhuri Awasthy as Kusum is cute and has her moment.


But the stars of the film are Gajraj Rao, Neena Gupta, Manurishi Chaddha and Sunita Rajwar. Gajrao Rao as Shankar Tripathi is arrogant but unintentionally funny, as per his character. The actor stands out in the meatiest role of his career. Especially his scenes with his Badhaai Ho (2018) co-star Neena Gupta are bang on. Neena Gupta as Sunaina Tripathi is a loving and badass mother. The actress has given a solid performance and managed to bring a smile on audiences’ faces with her impeccable comic timing.

Manurishi Chaddha and Sunita Rajwar as Chaman and Champa Tripathi are the other solid performers of the film. Their nok jhok with the elder Tripathis is one of the iconic moments of the film. Especially when Chaman and Shankar confront each other for watching adult videos during their teenage days - it is one of the highlights of Shubh Mangal Zyada Saavdhan.

Bhumi Pednekar’s special appearance is good and reminds us of the Shubh Mangal Saavdhan chemistry between Ayushmann and her.

The music of Tanishka Bagchi, Vayu and Tony Kakkar is good and suits the film. However, the background music by Karan Kulkarni is loud and irritating.

Chirantan Das’ cinematography is excellent, as his lenses show the beauty of the social-comedy film. Ninad Khanolkar’s editing is crisp and makes the film entertaining.

Shubh Mangal Zyada Saavdhan gives a lesson to homophobic people in society. The film has double masala of information and entertainment. It will not bore you for a single moment. After all, 'Iss Duniya Mein Pyaar Bina Chain Hi Kaha Hai'.

We give 3.5 stars out of 5 to Ayushmann Khurrana starrer Shubh Mangal Zyada Saavdhan.