A few seconds later, when Sundar's eyes fall on the Tamil novel Uvamai Kavignar lying on a nearby table, Meenakshi reveals that she loves reading and poses the same question to him. The boy's eyes light up and he says, 'I like playing book-cricket'. The nervousness in the air is palpable and it reaches you as well! The beauty of Meenakshi Sundareshwar lies in such simple moments. 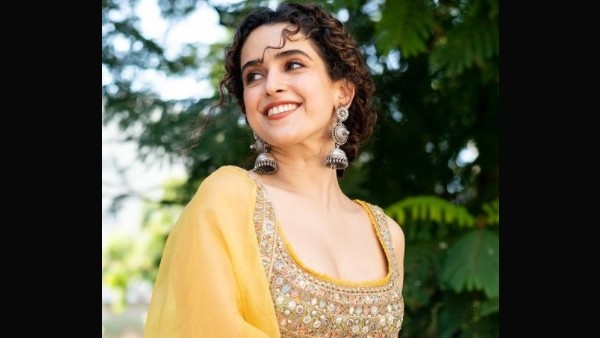 Sanya Malhotra On Meenakshi Sundareshwar: Could Relate To The Film Since I Was In A Long Distance Relationship

Meenakshi (Sanya Malhotra) and Sundareshwar aka Sundar (Abhimanyu Dassani) meet each other for the first time in an arranged marriage setup. While he is confident that engineers make the best husbands, the prospective bride already has a checklist when it comes to selecting her would-be life partner. We soon discover that she is a Rajinikanth oops...superstar Rajinikanth fan while movies put Sundar to sleep.

Despite their differing tastes and a glitch, the duo end up getting hitched with the blessings of their respective families. Happily ever after? Well, not in this case as Sundar bags a job opportunity in an IT firm in Bengaluru and shifts there minus his wife.

On reaching there, he lies about his marital status when he discovers that the company hires only single people. At the orientation seminar, the CEO of the company proudly declares, "I firmly believe, employees perform best when they are single. Minus the bullsh*t. In this age of swipe right and swipe left, it's hard to stay single for a long time. Hence, I keep my employees only for a year. You give me your one year uninterrupted and I'll give you the rest of your life."

Unable to resist this tempting offer and to avoid joining his father's saree business which is of least interest to him, Sundareshwar convinces Meenakshi for a long distance marriage. But does distance really make the heart grow fonder?

Meenakshi Sundareshwar marks the directorial debut of Vivek Soni who chose a sweet, simple and relatable theme for his first outing which revolves around a new-age couple facing trials and tribulations in their long distance marriage.

While the filmmaker gets the heartbeat of the film right by weaving some adorable moments between Meenakshi and Sundareshwar, the writer's pen goes a bit dry when it comes to throwing light on the couple's insecurities, bickering, flaws and conflicts when they are away from each other. Some sharp writing on that end would have elevated the film by several notches.

Abhimanyu Dassani who debuted in the Hindi film industry with Vasan Bala's highly entertaining Mard Ko Dard Nahin Hota, easily slips into Sundareshwar's role and exudes a boyish charm which makes his character endearing. He is the most fun to watch when he is being timorous on screen.

Sanya Malhotra packs a punch ala Rajinikath style as the cheeky Meenakshi who likes to pair kari dosa with Jigarthanda. There are many scenes where her eyes speak volumes and you hear the expressions aloud. Watch out for the scene where Meenakshi craving for some intimacy, breathes in the scent of Sundar's shirt and imagines a few tender moments with him.

Debojit Ray's camera work is top-notch as his lens beautifully captures the vibrant landscape of Madurai. He makes sure that his shots are exquisitely framed to capture the pulse of this temple city. Prasanth Ramachandran's editing is up to the mark.

In an age of remixes and recreations, Justin Prabhakaran stays true to the essence of the film and lends a South Indian touch to the music. Be it Abhay Jodhpurkar-Madhushree's 'Tu Yahin Hai', 'Vaada Machaaney' by Benny Dayal or Shashwat Singh & Aanandi Joshi's 'Mann Kesar Kesar', each song is distinctive from the other and blends well with the narrative.

Meenakshi Sundareshwar is as wholesome as a bowl of piping hot payasam. While it is loaded with subtle flavours (in this case, moments), a little more focus on the basic ingredients (writing) would have made the taste even more memorable.

We give 3 stars out of 5 for Abhimanyu Dassani-Sanya Malhotra's Meenakshi Sundareshwar.