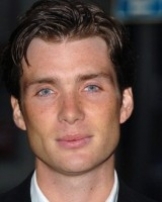 Cillian Murphy is an Irish film and theatre actor. He is often noted by critics for his chameleonic performances in diverse roles and distinctive blue eyes.

A native of Cork, Murphy began his performing career as a rock musician. After turning down a record deal, he made his professional acting debut in the play Disco Pigs in 1996. He went on to star in Irish and UK film and stage productions throughout the late 1990s and early 2000s, first coming to international attention in 2003 as the hero in the post-apocalyptic film 28 Days Later. Murphy's best-known roles are as villains in two 2005 blockbusters: the Scarecrow in the superhero film Batman Begins, and Jackson Rippner in the thriller Red Eye. Next came two contrasting, widely acclaimed starring roles: his Golden Globe Award-nominated performance as transgender outcast "Kitten" in 2005's Breakfast on Pluto and a turn as a 1920s Irish revolutionary in the 2006 Palme d'Or winner, The Wind That Shakes the Barley. In 2008, Murphy starred in the romantic drama The Edge of Love and made a cameo as Scarecrow in the Batman sequel, The Dark Knight.

A resident of London since 2001, Murphy often works in or near London and has expressed no desire to move to Hollywood. Uncomfortable on the celebrity circuit,he customarily gives interviews about his work, but does not appear on television talk shows or discuss details of his private life with the press.

Early life and music
Born in Douglas and raised in Ballintemple, two suburbs of Cork, Cillian Murphy is the eldest of four children. His father, Brendan, works for the Irish Department of Education and his mother is a French teacher. Not only are his parents educators, but his aunts and uncles are also teachers, as was his grandfather. Musicianship also runs in the family, and Murphy started playing music and writing songs at age ten.

Murphy attended the Catholic school Presentation Brothers College, where he did well academically, although he did get into trouble often, sometimes getting suspended, until deciding in his fourth year that misbehaving was not worth the hassle. Not keen on sport, a major part of life at PBC, Murphy found that creative pursuits were not fully nurtured at the school. Still, it was there that he got his first taste of performing, when he participated in a drama module presented by Pat Kiernan, the director of the Corcadorca Theatre Company. Murphy later described the experience as a "huge high" and a "fully alive" feeling that he set out to chase. His English teacher, the poet and novelist William Wall, encouraged him to pursue acting, but at this stage, to Murphy, performing meant dreams of becoming a rock star.

In his late teens and early twenties, Murphy worked toward a career as a rock musician, playing guitar in several bands alongside his brother Pádraig. The Beatles-obsessed pair named their most successful band The Sons of Mr. Greengenes, after a 1969 song by another idol, Frank Zappa. Murphy sang and played guitar in the band, which he has said "specialised in wacky lyrics and endless guitar solos." In 1996, The Sons of Mr. Greengenes were offered a five-album record deal by Acid Jazz Records, but they did not sign the contract. Because Murphy's brother was still in secondary school, their parents disapproved. Additionally, the contract offered little money and would have ceded the rights to Murphy's compositions to the record label.

Also in 1996, Murphy began studying law at University College Cork (UCC), but he failed his first year exams because, as he put it, he had "no ambitions to do it." Not only was he busy with his band, but he has admitted that he knew within days after starting at UCC that law was the wrong fit for his artistic personality. Furthermore, after seeing Corcadorca's stage production of A Clockwork Orange, directed by Kiernan, acting had begun to pique his interest. His first major role was in the UCC Drama Society's amateur production of Observe the Sons of Ulster Marching Towards the Somme, but, according to Murphy, his primary motivation then was to party and meet women, not to begin an acting career. Nonetheless, he began to transition away from working as a rock musician, about which he later remarked, "I think there's such a thing as a performance gene. If it's in your DNA it needs to come out. For me it originally came out through music, then segued into acting and came out through there. I always needed to get up and perform."

Early work
Murphy hounded Pat Kiernan until he got an audition at Corcadorca, and in September 1996, he made his professional acting debut on the stage, originating the part of a volatile Cork teenager in Enda Walsh's Disco Pigs. He later observed, "I was unbelievably cocky and had nothing to lose, and it suited the part, I suppose." Originally slated to run three weeks in Cork, Disco Pigs ended up touring throughout Europe, Canada and Australia for two years, and Murphy left university and his band.Though he had intended to go back to playing music, he secured representation after his first agent caught a performance of Disco Pigs, and his acting career began to take off.

From 1997 to 2003, Murphy starred in independent films, such as John Carney's On the Edge, in short films, including the Irish/English language short Filleann an Feall, and in the BBC television miniseries adaptation of The Way We Live Now. In addition to Disco Pigs, he starred in many other plays, including Shakespeare's Much Ado About Nothing, Neil LaBute's The Shape of Things, and Chekhov's The Seagull; Murphy considers this stage work to have been his "training ground." Murphy also reprised his Disco Pigs role for the 2001 indie film version by Kirsten Sheridan, performing his original song "So New" over the closing credits and singing The Kinks' "You Really Got Me" in a pub karaoke scene. During this period, he moved from Cork, relocating first to Dublin for a few years, then to London in 2001.

Murphy's onscreen performance in Disco Pigs caught the eye of director Danny Boyle when casting the lead for 28 Days Later. Released in the UK in late 2002, by the following July 28 Days Later had become a sleeper hit in America and a major success worldwide, putting Murphy before a mass audience for the first time. His performance as pandemic survivor Jim earned him nominations for Best Newcomer at the 2003 Empire Awards and Breakthrough Male Performance at the 2004 MTV Movie Awards. ComingSoon.net's review of the film said, "Cillian Murphy is a superb find... and he gives a breakout performance as a man torn apart by the new world into which he's awakened."

In late 2003, Murphy starred as a lovelorn, hapless supermarket stocker who plots a bank heist with Colin Farrell in Intermission, which became the highest-grossing Irish independent film in Irish box office history (until The Wind That Shakes the Barley broke the record in 2006). Murphy also appeared in supporting roles in his first Hollywood films, Cold Mountain and Girl with a Pearl Earring. For the latter film, he learned to chop meat in an abattoir to prepare for his role as a butcher, even though he is a vegetarian. In 2004, he toured Ireland in the titular role of The Playboy of the Western World, a Druid Theatre Company production under the direction of Garry Hynes, who had previously directed Murphy in Seán O'Casey's Juno and the Paycock and John Murphy's The Country Boy, also for Druid.

Personal life
In mid-2004, Murphy married his long-time live-in girlfriend, Yvonne McGuinness, an artist whom he met in 1996 at one of his rock band's shows. The couple live in northwest London with their two young sons, born in 2005 and 2007. Murphy is known for being reluctant to speak about his personal life. He frequently gives interviews about his work but does not do TV chat show appearances where actors customarily share information about their private lives. He does not have a stylist or a personal publicist, travels without an entourage, and often attends premieres alone. Shy and private, Murphy professes a lack of interest in the celebrity scene, finding the red carpet experience "a challenge... and not one I want to overcome." He intentionally practices a lifestyle that will not interest the tabloids: "I haven't created any controversy, I don't sleep around, I don't go and fall down drunk." Murphy is friends with fellow Irish actors Colin Farrell and Liam Neeson, looking up to the latter like a "surrogate movie dad." But primarily, Murphy's close friends are those he made before becoming a star.

Music is still an important part of Murphy's life. In 2004, he said, "The only extravagant thing about my lifestyle is my stereo system, buying music and going to gigs." He no longer plays in a rock band, but regularly plays music with friends and on his own, and still writes songs. Unlike many other famous actors who are also musicians, he does not plan to start another band: "Even if I was good, the very notion of being an actor with a rock band on the side would mean I'd never be taken seriously." Murphy is also a dedicated runner.

Though raised Catholic before turning agnostic in his teens, Murphy ultimately became an atheist after researching his role as a nuclear physicist/astronaut in the science fiction film Sunshine. He is a longtime vegetarian, not due to any moral objection to the killing of animals, but because of qualms about unhealthy agribusiness practices. Son-in-law to John J. McGuinness, a TD in the Irish parliament, Murphy participated in the 2007 Rock the Vote Ireland campaign targeting young voters for the general election. He has also campaigned for the rights of the homeless with the organization Focus Ireland.