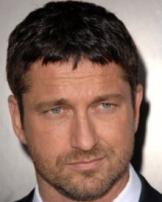 Gerard James Butler born in 13 November 1969 is a Scottish  actor, who has appeared on film, stage, and television. A trained lawyer, Butler turned to acting in the mid-1990s with small roles in productions such as the James Bond film Tomorrow Never Dies (1997), which he followed with steady work on television, most notably in the American miniseries Attila (2001). He garnered critical acclaim for his breakthrough work as the lead in Joel Schumacher's 2004 film adaptation of the musical The Phantom of the Opera. In 2007, Butler gained worldwide recognition through his portrayal of King Leonidas in the film 300. Since then, he has appeared in projects including P.S. I Love You (2007), Nim's Island (2008), RocknRolla (2008), The Ugly Truth (2009), Gamer (2009), Law Abiding Citizen (2009) and The Bounty Hunter (2010). He was recently in Belgrade filming Coriolanus.

Butler was born in Paisley, Scotland the youngest of three children of Margaret and Edward Butler, a bookie. He was brought up in a strict Roman Catholic family. Butler spent the first few years of his life in Montreal, Canada, before the family returned to live in Scotland.

He studied law at the University of Glasgow, and became the president of the Law Society, a position Butler later said he "kind of blagged my way into". Before his final year of law school, Butler took a year off to live in California. He mostly lived in Venice Beach, working at different jobs, travelling often, and, according to him, drinking heavily, at one point being arrested for alcohol-related disorderly conduct. Butler later described this year as, "I was out of control, and justifying it with this idea that I'm young, this is life. This is me just being boisterous". After his time off in America, he returned to Scotland to finish his final year at university. After graduating, Butler got a job as a trainee lawyer, but was fired soon thereafter, which Butler later said made him "quite infamous in Scottish legal circles", due to the rarity of trainee lawyers being fired. A week before being fired, in 1995, Butler had been inspired to try acting, after seeing a stage production of Trainspotting at the Edinburgh Festival; his firing gave him the impetus to plunge fully into the acting world. He moved to London the next day, to try to begin an acting career.

In London, Butler held a series of odd jobs until being cast by actor and director Steven Berkoff (who later appeared alongside him in Attila (2001/I) (TV)) in a stage production of Coriolanus. He was cast as Ewan McGregor's character Renton in the stage adaptation of Trainspotting, the same play that had inspired him to become an actor. His film debut was as Billy Connolly's younger brother in Mrs. Brown (1997).

His film career continued with small roles, first in the James Bond movie Tomorrow Never Dies (1997) and then Russell Mulcahy's Tale of the Mummy (1998). In 2000, Butler was cast in two breakthrough roles, the first being Attila the Hun in USA film Attila (2001/I) (TV). The film's producers wanted a known actor to play the part but kept coming back to Butler's screen tests and decided he was their man. He was cast as Dracula in Dracula 2000 (2000).

He then appeared in Reign of Fire (2002) as Creedy and Lara Croft Tomb Raider: The Cradle of Life (2003) as Terry Sheridan, alongside Angelina Jolie. In the role of Andre Marek in the big-screen adaptation of Michael Crichton's novel Timeline (2003), Butler played an archaeologist who was sent back in time with a team of students to rescue a colleague.

In 2003, director Joel Schumacher was deciding on the principal casting for the film The Phantom of the Opera, a film adaptation of the Andrew Lloyd Webber musical of the same name, and thought of Butler, whom he had seen earlier in the film Dracula 2000, to play the title character. Butler, who had had no musical experience other than singing in a rock band while he was studying to be a lawyer, was surprised at the interest, but immediately began taking singing lessons with a vocal coach. He then did an acting audition with Schumacher, and a singing audition with Lloyd Webber, both of whom were impressed by his performance.

In 2007, he starred as Spartan King Leonidas in the Warner Bros. production 300, which is often described as his breakout role. Butler, who said he "wanted to look really strong" in the film, trained with a high-intensity workout for four months prior to the film's shooting.

In 2007, he also appeared in Butterfly on a Wheel co-starring Pierce Brosnan and Maria Bello, which aired on network TV under the title Shattered, and in the romantic comedy P.S. I Love You with Hilary Swank. In 2008, he appeared in Nim's Island and RocknRolla. In 2009, he starred in the Mark Neveldine / Brian Taylor film Gamer, The Ugly Truth and Law Abiding Citizen, which he also co-produced. In 2010 he starred in the action/comedy The Bounty Hunter with Jennifer Aniston, and lent his voice to the 2010 animated film How to Train Your Dragon as Stoick the Vast.

On October 15th and 16th, 2010, thanks to the popularity of his role as Spartan King Leonidas and the use of his lines during athletic events at Michigan State University he was a guest at their Midnight Madness and homecoming football game, respectively.