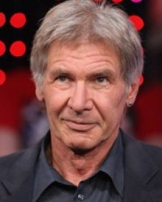 Harrison Ford is an American actor. Ford is best known for his performances as Han Solo in the original Star Wars trilogy and as the title character in the Indiana Jones film series. He is also known for his role as the haunted android tracker Rick Deckard in Ridley Scott's sci-fi film Blade Runner and as CIA operative Jack Ryan in the films Patriot Games and Clear and Present Danger. His four-decade career also includes roles in other Hollywood blockbusters such as The Fugitive, Air Force One, Witness, Presumed Innocent and What Lies Beneath. At one point, Ford had roles in the top five box-office hits of all time, though his role in E.T. the Extra-Terrestrial (as Elliot's school principal) was deleted from the final cut of the film. Five of his films have been inducted into the National Film Registry.

Early life
Ford was born on July 13, 1942, to Dorothy (née Dora Nidelman), a homemaker and former radio actress, and Christopher Ford (born John William Ford), an advertising executive and a former actor. A younger brother, Terence was born in 1945. Harrison Ford's maternal grandparents, Anna Lifschutz and Harry Nidelman, were Jewish immigrants from Minsk, Belarus (at that time a part of the Russian Empire). His paternal grandparents, Florence Veronica Niehaus and John Fitzgerald Ford, were of German and Irish Catholic descent, respectively When asked in which religion he was raised, Ford jokingly responded, "Democrat". He has also said that he feels "Irish as a person, but I feel Jewish as an actor".

Ford was active in the Boy Scouts of America, and achieved its second-highest rank, Life Scout. He worked at a Scout camp as a counselor for the Reptile Study merit badge. Because of this, he and Eagle Scout director Steven Spielberg later decided that the character of young Indiana Jones would be depicted as a Life Scout in the film Indiana Jones and the Last Crusade. They also jokingly reversed Ford's knowledge of reptiles into Jones's fear of snakes.

In 1960, Ford graduated from Maine East High School in Park Ridge, Illinois. His was the first student voice broadcast on his high school's new radio station, WMTH, and he was its first sportscaster during his senior year, 1959–1960. The radio room still bears his graffiti. He attended Ripon College in Wisconsin, where he was a member of the Sigma Nu fraternity. He took a drama class in his junior year, chiefly as a way to meet women. Ford, a self-described "late bloomer", became fascinated with acting. Towards the end of his freshman year, he was a member of a folk band called The Brothers Gross; playing gutbucket. Ford did not graduate.

Career
In 1964, Ford travelled to Los Angeles, California to apply for a job in radio voice-overs. He did not get it, but stayed in California and eventually signed a $150 a week contract with Columbia Pictures's New Talent program, playing bit roles in films. His first known part was an uncredited role as a bellhop in Dead Heat on a Merry-Go-Round (1966). There is little record of his non-speaking roles (or "extra" work) in film.

His speaking roles continued next with Luv (1967), though he was still uncredited. He was finally credited as "Harrison J. Ford" in the 1967 Western film, A Time For Killing, but the "J" didn't stand for anything since he has no middle name. It was added to avoid confusion with a silent film actor named Harrison Ford, who appeared in more than 80 films between 1915 and 1932, and died in 1957. Ford later said that he was unaware of the existence of the earlier Harrison Ford until he came upon a star with his own name on the Hollywood Walk of Fame.

Ford soon dropped the "J" and worked for Universal Studios, playing minor roles in many television series throughout the late 1960s and early 1970s, including Gunsmoke, Ironside, The Virginian, The F.B.I., Love, American Style, and Kung Fu. He then appeared in the western Journey to Shiloh (1968) and had an uncredited role in Michelangelo Antonioni's 1970 film Zabriskie Point as an airport worker. Not happy with the roles being offered to him, Ford became a self-taught professional carpenter to support his then-wife and two small sons. While working as a carpenter, he became a stagehand for the popular rock band The Doors. He also built a sun deck for ­­­Sally Kellerman and a recording studio for Sergio Mendes.

He returned to acting when George Lucas, who had hired him to build cabinets in his home, cast him in a pivotal supporting role for his film American Graffiti (1973). His relationship with Lucas was to have a profound effect on Ford's career. After director Francis Ford Coppola's film The Godfather was a success, he hired Ford to do expansions of his office and Harrison was given a small role in his next two films, The Conversation (1974) and Apocalypse Now (1979).

Personal life
Ford is one of Hollywood's most notoriously private actors, zealously guarding his personal life. He has two sons (Benjamin and Willard) with his first wife, Mary Marquardt, as well as two children (Malcolm and Georgia) with his second wife, screenwriter Melissa Mathison. He is engaged to Calista Flockhart, who has an adopted son, Liam. Ford's first grandson, Eliel, was born in 1993, his first grandaughter, Giuliana, in 1997 and his second grandson, Ethan, in 2000. Eliel is Willard's son, and Ethan is Benjamin's son. Benjamin is also the owner of Ford's Filling Station, a gastro pub in Culver City, California.

Ford injured his chin at the age of 20 when his car hit a telephone pole in Northern California; the scar is visible in his films. An explanation for it on film is offered in Indiana Jones and the Last Crusade, when a young Indiana Jones cuts his chin while attempting to crack a whip to ward off a lion. In Working Girl, Ford's character explains that it happened when he passed out and hit his chin on the toilet when a college girlfriend was piercing his ear. In June 1983, at age 40, during the filming of Indiana Jones and the Temple of Doom in London, he herniated a disc in his back, resulting in him flying back to Los Angeles for an operation and returning to work just over six weeks later.