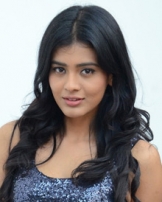 Hebah Patel is an Indian actress and model who has appeared in Tamil and Telugu films.

Hebah Patel made her feature film debut with the Tamil romantic film, Thirumanam Enum Nikkah, appearing as Naseema, the second heroine in the film alongside Jai and Nazriya Nazim. The film opened after several delays to mixed reviews and performed poorly at the box office.