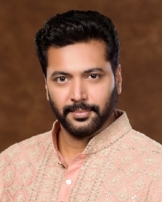 Jayam Ravi is an actor who works in the Tamil film industry. He made his acting debut with "Jayam," released in 2002, produced by his father, editor Mohan, and directed by his brother, M. Raja. He is a martial arts expert and a trained dancer. After completing his degree in visual communication from Loyola College Chennai, he decided to get into the acting industry.

On September 10, 1980, Jayam Ravi, known as Mohan Ravi, was born in Tirumangalam, Madurai. He was raised in both Chennai and Hyderabad.

His father is Mohan, an editor, and his mother is Varalakshmi. He has one brother, M. Raja, who is a successful director, and a sister, Roja, who is a dentist. Ravi attended Jawahar Vidyalaya in Ashok Nagar, Chennai, and then Loyola College, where he earned a bachelor's degree in visual communications.

He studied dance with the Bharatnatyam dancer Nalini Balakrishnan and performed his arrangetram (debut) when he was twelve years old. He has also undergone training in acting at the Kishore Namit Kapur Institute, Mumbai. He is a martial arts expert and a trained dancer. After completing his degree in Visual Communication from Loyola College, Chennai, he decided to get into the acting industry.


Career Life
Jayam Ravi was a hero who has a conventionally attractive appearance by nature, and he had formal training to become an actor. He made his acting debut in the brother-directed movie Jayam, which was his first project in the Tamil film business. His father, Mohan, served as the movie's producer. He rose to fame in Tamil Nadu as Jayam Ravi after the massive success of this movie.

In 2003, he had his next release, the action-masala film M. Kumaran, Son of Mahalakshmi, which performed better at the box office than his previous efforts. One of the most successful and highest-grossing movies in 2007 was Deepavali. After that, Ravi played a wealthy, upbeat NRI from London who must struggle to win the love of his life. Jeeva, who directed Dhaam Dhoom in 2008, passed away while the movie was being shot in Russia.

Comeback
In the Kollywood industry, he became an inevitable hero, but for a while, he struggled to develop quality films. However, in the film Thani Oruvan, directed by his brother, he made a stronger comeback.