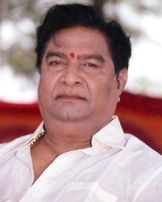 Kaikala Satyanarayana is an Indian film actor, producer and director in Telugu cinema. He was the jury member for South Region II at the 59th National Film Awards. He is the recipient of the 2011 Raghupathi Venkaiah Award and 2017 Filmfare Award, both of which awarded him for lifetime achievement in Telugu cinema.

Kaikala Satyanarayana was born on July 25, 1935, to Kaikala Laxmi Narayana couple at Kautaram village in Krishna district. Having completed his primary and intermediate education in Gudivada and Vijayawada, Satyanarayana graduated from Gudivada College. He married Nageswaramma on April 10, 1960, and is blessed with two daughters and sons.

With his striking personality and sound voice, Satyanarayana landed in Madras for roles in movies. He was first noticed by DL Narayana. Narayana offered him a role in his film Sipayi Koothuru directed by Changayya in 1959. Though the film did not do well at the box office, he was noticed by one and all. It is quite interesting to note that one of the reasons why the makers noticed him is his resemblance to NTR.

They found him as a prospective candidate to play dupe to NTR. And Satyanarayana aptly fitted that place. He played dupe to NTR in several movies. This is when NTR noticed him. NTR offered Satyanarayana a role in his film Apoorva Sahasra Siraccheda Chintamani in 1960. This film was directed by SD Lal. Satyanarayana played the role of a prince in that film.

It was the vision of Vitalacharya to cast Satyanarayana as villain. This would change Satyanarayana's career forever. Vitalacharya casted him in a negative role in his film Kanaka Durga Pooja Mahima. He fitted the role to the T and from then on, Satyanarayana grew to infinite bounds in establishing himself in the villain role.

While carving a career as a villain, Satyanarayana also did character roles in parallel. This elevated him as an actor. Telugu industry is blessed to have an actor as versatile as Satyanarayana. There is not one role which is not done by this actor. Whatever role he entered into, he just lived in it. As NTR is for Lord Rama, Krishna, etc., Satyanarayana is for Yama. He did Yama roles in Yamagola and Yamaleela.

Satyanarayana, who has been contributing to Telugu movies for over 4 decades, has acted in 777 movies. He has portrayed a variety of roles like mythological, villain, comedy, soft roles, etc., in a very special way. Satyanarayana is the king of all nine Rasas and hence the title Navarasa Natanaa Sarvabhouma has been synonymous with his name.

Satyanarayana established Rama films production banner and made films such as Kodama Simham, Bangaru Kutumbam, Muddula Mogudu, etc. In 1996, he stepped into politics by winning the Lok Sabha elections from Machilipatnam constituency.