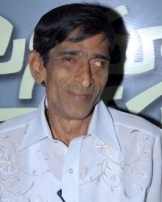 Kallu Chidambaram was an Indian comedian actor in Telugu films. He had acted in many telugu films and blessed with many comic roles. Most of the telugu comedy film directors like E. V. V. Satyanarayana, S.V.Krishna Reddy, Relangi Narasimha Rao etc, had associated with him for exclusive comic roles in their films.

Kallu Chidambaram died on 19 October 2015 at Care hospital in Vishakapatnam. He was suffering from breathing ailments since few months and was undergoing treatment at Care.