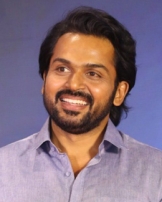 Karthik is the son of actor Sivakumar and the younger brother of actor Suriya Sivakumar. On May 25, 1977, in Chennai. He did his schooling at St. Bede's Anglo-Indian Higher Secondary School, and he completed his graduation in mechanical engineering from Crescent Engineering College, Chennai. Later, he studied industrial engineering at Binghamton University in New York. He also worked as a graphic designer.

Karthi married Ranjani (the daughter of Chinna Saamy) on July 3, 2011, in Coimbatore and they were blessed with child on 2013 and named her Umayaal.

He worked with director Mani Ratnam as an assistant director for the film Aayutha Ezhuthu, but earlier, Mani Ratnam offered him a role in the same film, which Karthi rejected, and he continued as an assistant. In 2006, director Ameer approached Karthi about playing the lead role in his third film, Paruthiveeran. After receiving a few suggestions from his father and brother, Karthi starts his acting career with Ameer for Paruthiveeran.

Paruthiveeran was released in 2007, and it became a blockbuster. Karthi won numerous awards, including the Filmfare Best Debut and Best Actor awards. Then he did a movie called Aayirathil Oruvan with Selvaraghvan; it's a fantasy movie, so it took some time to get released, while he also acted in a romantic movie called Payya with Lingusamy. Both were released in 2010 and went on to become hugely successful at the box office.

In the same year, his film Naan Mahaan Alla, directed by Suseendran, was released and received some mixed reviews, but it did well at the box office. All of his films were later dubbed into Telugu and commercially released. His next venture is Siruthai, which is a Telugu remake of Vikramakoodu, released for Pongal 2011.For the first time, he played a dual role as a rowdy and strict police officer, and the film was a huge hit in theatres due to its commercial aspects.