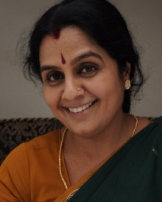 Kuyili is a Tamil veteran actress, who has done a number of item dances in South Indian and in some Bollywood movies. Also, she has acted as a heroine in some movies, and later did many roles as a character artist in movies. She is famous for the "Nila Athu Vaanathu Mela" song in Kamal Haasan 's Naayagan.

Kuyili also has done some TV serials which gave her a good comeback, as she played a mother's role and it created a huge number of fan followers. She has taken part in TV shows as well.