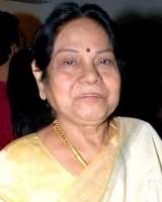 Leelavathi is an Indian Actress, who mainly works in Kannada, Tamil, and Telugu films. She has acted in more than 600 films throughout her career of more than 50 years. She is known for her memorable performances in Bhakta Kumbara, Mana Machida Madadi and Santa Tukaram. She has been the recipient of the Dr. Rajkumar Award in 1999 and the Filmfare Awards.
Early life
She was born Leela Kiran in 1937 at Beltangadi, Dakshina Kannada district. She lost her parents at the age of 6.
Film career
She got a small role in Chanchala Kumari and then in Shanker Singh's film Naga Kannika. She later joined the troupe of Mahalinga Bhagavathar's Sri Sahitya Samrajya Drama Company. She got a chance to act in Subbainaidu's 1958 movie Bhakta Prahlada and movies like Mangalya Yoga, Dharma Vijaya, and Ranadheera Kanteerava. It was from Rani Honnamma that Leelavathi became a full-fledged heroine. In Santha Thukaram, Kantheredu Nodu, Kaivara Mahatme, Gaali Gopura, Kanyarathna, Kulavadhu, Veera Kesari, and Mana Mecchida Madadi, she was the leading lady. She has starred in supporting roles in Gejje Pooje and Doctor Krishna for which she received the Karnataka State Awards.
Honorary Doctorate
Actress Leelavathi was conferred with an honorary doctorate from Tumkur University in the year 2008 for her contribution to southern cinema.