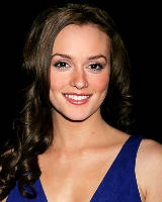 Leighton Marissa Meester born on April 9, 1986. She  is an American actress and singer. Meester gained fame for playing the role as Blair Waldorf in the CW young-adult television series Gossip Girl. She subsequently ventured into motion pictures and has many successful films to her credit, including Flourish, Remember the Daze, Drive-Thru, and Killer Movie. She most recently appeared in the 2010 country drama film, Country Strong. As of January 2011, she is set to appear in three big screen movies: The Roommate, Monte Carlo and The Oranges.

Early life:
Meester was born to parents Constance and Doug while her mother was serving a federal prison sentence in Fort Worth, Texas. Although her mother was serving time in prison for her involvement in a drug ring that smuggled marijuana from Jamaica to the United States, she was able to give birth to Leighton in a hospital and nurse her for three months in a halfway house before returning to prison to complete her sentence. At this time Leighton's grandmother cared for her.

Meester maintained that her parents gave her a normal upbringing and, despite their criminal past, are good people with experience that has only made Meester more open-minded and non-judgmental, "It made me realize that you can't judge anyone - especially your parents - for what they've done in their past, because people change." Meester jokes, "Look, I could've turned out a lot worse" and has even cited her mother as her style icon. Meester grew up in Marco Island, Florida, where she participated in productions at a local playhouse. When she was 11 years old, Meester and her mother moved to New York. Meester attended the Professional Children's School and also began working as a model with Wilhemina, booking a Ralph Lauren campaign shot by Bruce Weber and working with then photographer (now film maker) Sofia Coppola. Meester made her television acting debut as a murder victim's friend on an episode of Law & Order. At 14, Meester moved to Los Angeles, California, wanting more stable work and attended Hollywood High School and Beverly Hills High School. She then transferred to a small private school and graduated a year early. Meester's last name is Dutch, which means "master" or "teacher."

Career - Acting:
Meester at the 2009 CW Upfront presentation:
After her television debut in 1999 playing Alyssa Turner in Law & Order, Meester appeared as a guest in two more series before landing her big role in the movie Hangman's Curse, based on the best-selling book by Frank Peretti. Meester also appeared in Tarzan, which ran for only eight episodes. Meester started to land guest roles in other series such as Crossing Jordan, 7th Heaven, Veronica Mars, 24, and Entourage. In 2005, Meester began a regular role in the series Surface as Savannah Bennet. Meester appeared in two more 2006 movies, Flourish and Inside. She also guest appeared in Numb3rs and in two episodes of House M.D. as Ali, a young girl who has a crush on House.

After guest roles on CSI: Miami, Shark, and playing the female lead in the horror film Drive-Thru, Meester was cast in CW's Gossip Girl as Blair Waldorf. The show is based on the book series by Cecily von Ziegesar about the lives of New York's privileged Upper East Side young adults. Her performance has been met with critical acclaim.

In 2007, Meester appeared on the television film The Haunting of Sorority Row, and played a part in the ensemble comedy/drama Remember the Daze. She also appeared in the horror/thriller film Killer Movie in 2008.

Meester had a small role in the 2010 comedy Date Night and a small role in Going The Distance. She was cast in Screen Gems's upcoming dramas Country Strong and The Roommate. She will star in The Uncatchable Cowgirl Bandits of Nottingham, Texas alongside Amber Heard; in the indie dramatic comedy The Oranges opposite Hugh Laurie; and will star next to Selena Gomez and Katie Cassidy in the young femme comedy Monte Carlo, loosely based on Jules Bass's young-adult book Headhunters.

Music:
In April 2009, Meester signed a recording contract with Universal Republic. Meester's first single, "Somebody To Love", featuring R&B singer Robin Thicke, was released for airplay on October 13, 2009 and became available for digital download on October 14, 2009. Her second single, "Your Love's A Drug", was digitally released on March 30, 2010.

Meester is featured in the Cobra Starship song "Good Girls Go Bad", which reached the Top 10 on Billboard Hot 100 peaking at #7. She recorded a cover of the song "Christmas (Baby Please Come Home)" for the compilation album A Very Special Christmas 7. She is featured on Stephen Jerzak's song "She Said".  She recorded a cover of the song "Words I Couldn't Say" by Rascal Flatts for the movie Country Strong, featured on the film's soundtrack.  Along with promotion for her 2010 film Country Strong she released a promotional single titled "Summer Girl". The music video is a group of clips from the movie. It can be viewed on the website for the film.

Endorsements:
In 2008, Meester posed with Ed Westwick in a Nikon Coolpix series camera advertisement. Meester also appeared in Clearasil commercials and in 2009 ads for Reebok.  She has been a spokesperson for Sunsilk's "Life Can't Wait" campaign. In June 2009, she and Ed Westwick were named the new faces for the Korean clothing line ASK Enquired. She has also been a spokesperson for Safe Horizon to raise awareness about and prevent domestic violence.  Most recently, Meester has signed on to be the current spokesperson for Herbal Essences hair products. Vera Wang has also chosen Meester to be the face of her newest scent breaking in summer of 2011, stating that the actress's "beauty, talent and spirit will inspire all the young women that I hope will enjoy this passionate, new young fragrance."  Leighton Meester has also just been named the new face of fashion house Missoni's Spring/Summer 2011 campaign  and South Korean makeup brand eSpoir.