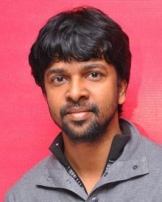 Madhan Karky Vairamuthu is a Tamil software engineer, poet, teacher,lyricist, and film dialogue writer. He is better known as the son of the famous Tamil poet and lyricist Vairamuthu. Madhan Karky stepped into the Tamil film industry with the 2009 release Kanden Kadhalai in which he penned the lyrics for a song titled Ododi Poren. But it was his work in the 2010 blockbuster and Tamil superstar Rajinikanth starrer Enthiran that shot him to fame.

In the 2010 release, Enthiran he penned the lyrics for the song Irumbile oru Irudhaiyam and received rave reviews for his work. Being a person from a technical background, he also worked as one of the dialogue-writers for the movie which was basically set agaiinst a scientific backdrop.
His works includes the song Nenjil Nenjil from the movie Engeyum Kaadhal, Vaanthan Vendran and the movie KO audio track released and all the movie songs were hit, Especially the Ennamo Edho song from KO makes him very popular.