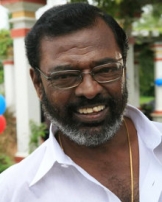 Manivannan was a popular Tamil actor and director. With over 400 films to his name, Manivannan was one of the most experienced actors in the field. He normally played the role of a dad or a senior comedian.

Character actor Manivannan hailed from a small town called Sulur in Coimbatore district. While doing his P.U.C. in Kovai Govt. Arts College, he made friends with a lanky young man who happened to be his contemporary and the young man is none other than Sathyaraj. Their friendship stood the test of time and proved to be a mutually rewarding relationship. While still a collegian, Manivannan was bitten by the stage-bug and consequently he staged a few performances.

Inspired by the impact the film Kizhakkae Pogum Rail made on him, he feverishly scribbled a fan mail to the filmmaker Bharathiraja and the letter ran to more than a hundred pages. Bharathiraja liked the earnest impressions made by the bearded and emaciated man from Coimbatore. He took him under his fold as an apprentice. Manivannan joined Bharathiraja's camp around 1979, when the revolutionary director was acting in and directing a real classic, "Kallukkul Eeram". He learnt the trade hard and fast and penned the story and dialogues for some of his mentor’s films like "Nizhalgal", "Tick Tick Tick" "Alaigal Oayvathillai" and "Kaathal Ovium". Manivannan assisted Bharathiraja in a handful of films like "Puthya Vaarppugal", "Koththa Jeevithaalu" (Telugu), "Kizhakkae Pogum Rail" (Telugu), "Red Rose" (Hindi), "Lovers" (Hindi) and "Kizhakkae Pogum Rail" (Tamil).

He had also penned the story and dialogues for a bunch of other films like "Lottery Ticket" acted by Prabhu, "Aagaaya Gangai" acted by Karthik, "Naesam" acted by Ajith Kumar. In "Kodi Parakkuthu", directed by Bharathiraja, Manivannan did the villain’s role. "Amaithip Padai", directed by Manivannan, is believed to have given him the headway as an actor. He started getting plush offers and was seen acting in as many as thirty films in a year. Manivannan joined the political party BJP and campaigned for them during the 2006 Assembly elections.

His favourites were oldies T.S. Balaiya and S.V. Ranga Rao. He was a great fan of the comic genius Charlie Chaplin. Sathyaraj was his pet and favourite in Tamil cinema. He loved to watch MGR in action. Akira Kurosawa (Japan), Satyajit Ray and Bharathiraja were his favourites in direction. His father R. Subramaniam was a rice merchant as well as a textile trader. Manivannan's mother was Maragatham.

Manivannan has directed some films in Tamil. But is most known for his acting. He had acted along with many a stars including Rajinikanth, Kamal Haasan among others. He starred in over 400 films.

Manivannan has cast Sathyaraj in a good 25 films. His protégés have proved themselves as successful directors. Vikraman, R.K. Selvamani, Sunder C, Seemaan, K. Selvabharathi, Radhabharathi, C.V. Sasikumar, E. Ramadoss and Jeeva Balan once took orders for Manivannan. Withering irony, and a very cool way of delivering the dialogues was Manivannan’s motif and style in films.

Manivannan died shortly after the release of his 50th directorial venture Nagaraja Cholan MA, MLA due to a cardiac arrest (heart attack) on June 15, 2013, at the age of 58 in his Nesapakkam residence at Chennai. His body was wrapped in the flag of Tamil Eelam as he wished.