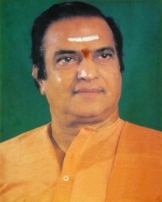 Nandamuri Taraka Rama Rao (Telugu: నందమూరి తారక రామా రావు) (born Nimmakuru, Krishna District, Andhra Pradesh; 28 May 1923–18 January 1996), also known as NTR, was an actor, director, producer, and politician. He is the founder of Telugu Desam Party and served as Chief Minister of Andhra Pradesh. He was awarded the Padma Shri by the Government of India in 1968, recognizing his contribution to Telugu cinema. After his career in movies, Rao became a political activist and a political party leader. He is known as an advocate of Andhra Pradesh's distinct cultural identity, distinguishing it from Madras State with which it was often associated

Generally, he played multiple roles in the same movie.

Rao's formal academic training was in Telugu literature under the tutelage of Dr. Vishwanatha Satyanaraya.. Rao authored several literary works including screen plays, treatise on the meaning of various puranas. During the making of Narthanasala, Rao was trained in classical Kuchipudi and Rudra Natyam under the tutelage Dr. Vempati Satyam. Rao and Satyam created various classical mudras (poses and manarisms) for male dancers.

He actively campaigned for the construction of a large number of movie theaters in rural locations and was influential in designing and implementing a financial system that funded the production and distribution of movies.

Telugu Desam Party
In 1982, Rao set about campaigning with his newly-formed party Telugu Desam Party. His theme of the campaign was that "If the Chief Minister of Andhra Pradesh couldn't get audience with Delhi, How could a commoner get to make his voice heard?" He defeated the Indian National Congress. Rao himself contested elections from the constituency of Hindupur in Anantapur District and Gudivada in Krishna district.

With a victory in the immediate election, Rama Rao formed a government and ruled the state of Andhra Pradesh for a full term. He went into the elections with the slogan Telugu vari Atma Gauravam, "Telugu people's self-respect."[6][unreliable source?] In his rule he also passed the law which gives equal rights to daughters for the inheritance of ancestral property.

On Independence day, August 15, 1984, Rao was removed from office by Ramlal, then governor of Andhra Pradesh, after a revolt by his aide, Nadendla Bhaskara Rao, while Rama Rao was in the United States for open heart surgery. Rao launched his "chaitanya ratham" ("back to the people agitation") on the third day after his surgery. Prime Minister of India Indira Gandhi dismissed Ramlal and appointed Shankar Dayal Sharma in his place. Nadendla Bhaskara Rao could not establish majority in the assembly in one month's time, and Sharma handed power back to Rama Rao, who dissolved the Andhra Pradesh State Assembly and asked for a fresh mandate in 1985.

Second Term
On his return to power, Rao abolished the Legislative Council of Andhra Pradesh, claiming it was a non-performing body which was just a burden on the state exchequer. He introduced management reforms that held corrupt government offices accountable to elected representatives.[7][unreliable source?] He changed the donation system for engineering and medical institutes and introduced EAMCET. He removed the grace mark system for high schools. He made it illegal for government college lecturers offering private tuitions.

Rao created a new commando force for the state He divested non-performing Allwyn State Manufacturing enterprise by selling it to Mahindra Machines.

He built the largest bus station in Asia, commissioned the largest Buddha statue in the world at the time to highlight the Buddhist heritage and history of Andhra. He adorned 'Tank Bund' with the statues of literary personalities, warriors and kings of the past, thus creating a sense of heritage.

The Telugu Desam Party operations were significantly computerized and a systematic local party structure was built and this resulted in the establishment of a stable second political party that survived his death. Rao introduced the concept of strong states with strong center in his discussions about state power with Gandhi and ushered in a new era of empowered local governments, within the framework of India. The long held belief that strong states imply a weak and collapsing country is no more a political dogma that governs center state relations in India. He also lobbied and won the amendment of Hindu inheritance laws to give women equal rights in inheritance.

He suffered a mild stroke and was unable to campaign in the 1989 election, which he lost.

Third Term
He returned again to power in 1994 when he promised he would offer rice at Rs. 2/kg and to make Andhra Pradesh alcohol free.

He introduced Rs2/kg rice program. This social net program was later extended to include free food for primary school children in government schools for the same income group and that scheme encouraged the single biggest drop in child labor and increase in primary school enrollment.

Rao directed his tourism department to invest heavily into restructuring Tirupathi, Tirumala and Amaravathi into tourist destinations and into spiritual capitals of Andhra.

Second Breakup of the TDP
In 1995, his son-in-law, Nara Chandrababu Naidu split Rao's party after Rao won by a land slide. Naidu convinced most of the TDP legislators to elect him as their leader, making him the chief minister.

Personal life
Rao's first marriage was to Basavatarakam; after her death[when?] he married Lakshmi Parvathi (who established NTR TDP). He had seven sons and four daughters including Bhuvaneswari, wife of Nara Chandrababu Naidu (the vice-chairperson of Heritage Foods); and Daggubati Purandeswari, MP for the Indian National Congress Party and wife of Daggubati Venkateswara Rao. His son Nandamuri Balakrishna is an actor in the Telugu film industry; and Nandamuri Harikrishna, an actor and politician. He has several grandchildren, including N. Kalyan Ram, N. T. Rama Rao Jr.