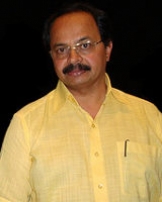 Nagathihalli Chandrashekhar (Kannada: ನಾಗತಿಹಳ್ಳಿ ಚಂದ್ರಶೇಖರ್) is a Kannada film director. Chandrashekhar, also known as Chandru, has directed about 15 Kannada movies and about 10 Tele-serials. He is also a writer (Novels and short stories) and was a columnist in Kannada weekly Hai Bangalore.

Early life
Chandrashekhar was born in a Kannada-speaking family in Nagathihalli, a village in Mandya district of Karnataka.[1] His interests were towards Kannada language, Kannada literature and Art right from his childhood.

Education
Chandrashekhar has done his Post Graduation (Master of Arts) in Kannada literature from the Mysore University. He was a recipient of 8 gold medals and 2 cash awards during his education of post graduation.

Personal life
Chandrashekhar is married to Shobha, a software engineer in Bangalore. They have two daughters, Sihi (Sweet) and Kanasu (Dream). In an interview, Chandrashekhar had said "Sweet dreams is a very favourite phrase for me. That's the reason I've named my children after this phrase."

Cinema
Chandrashekar entered the filmmaking business by directing the movie Kadina Benki. Later he directed several award winning films. A quintessential intellectual, he is one of the few auteurs of cinema who believes in cinema as a cultural and creative phenomenon. Chandrashekar has added another first in his long list of achievements as the first Kannada filmmaker to promote his film Maathaad Maathaadu Mallige at the prestigious 2007 Cannes Film Festival