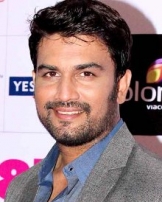 Sharad Kelkar is an Indian television actor, hails from the city of Gwalior in Madhya Pradesh. He has an MBA in Marketing from Prestige Institute of Management & Research, Indore and is married to fellow actor and co-star Keerti Gaekwad Kelkar.

Sharad Kelkar was a Grasim Mr. India finalist. Sharad was the host of the show Pati Patni Aur Woh (TV series) on Imagine TV in 2009.

His role as Thakur Digvijay Singh Bhadoria in the show Bairi Piya earned him critical acclaim for his performance.