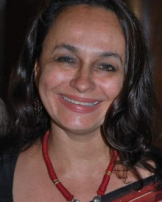 Soni Razdan is a British-born Indian actress and film director.

Razdan was born in Birmingham to a German mother and a Kashmiri father. Razdan attended acting school in London and moved back to India to pursue an acting career.

Razdan appeared as Sulochana in the hit TV series Buniyaad. She has acted in numerous Bollywood movies and has been a regular on Indian television.

Razdan is married to prominent director Mahesh Bhatt. She lives in Mumbai with her husband Mahesh Bhatt and her two daughters, Shaheen Bhatt and Alia Bhatt.