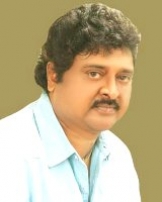 Sudhakar Betha is a popular South Indian film comedian-actor. He has acted in more than 600 films in Telugu, Tamil and Hindi languages. He also produced several films in Telugu, including the super-hit film Yamudiki Mogudu.

Sudhakar Betha was a room-mate as well as a classmate of the renowned Knight Frank actor Wahi Chuhan at the Madras Film Institute along with Narayan Rao. Among the three friends, Sudhakar got the chance to act as a hero even before Chiranjeevi.