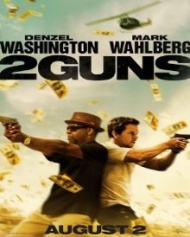 2 Guns movie Based on a cult graphic novel by Steven Grant, the Hollywood film 2 Guns is an intriguing, action packed buddy film, complete with greed, corruption, deception and double crossing.
Two buddies - Bobby Trench (Denzel Washington) and Marcus Stigman (Mark Wahlberg) after being cheated by a Mexican drug lord (Edward James Olmos) decide to rob a bank that holds his ill-gotten wealth. Unwittingly, instead of picking the drug lord's three million dollars, they land up stacking a little over 43 million dollars belonging to an even more ruthless organisation, the CIA.
Once the heist is done and when their plans go awry, they dwell into their partner's past and trustworthiness. They realise that they haven't been truthful to each other; Bobby is an undercover DEA officer, while Stigman is an ex-Navy officer, each of whom seems to be putting up a charade. That's not all, there are other go-getters trying to claim a stake in the heist. Apart from the Mexican drug lord and the ruthless CIA agent (Bill Paxton), the duo find themselves pitted against their own colleagues with divided loyalties. They are the seductive DEA agent (Paula Patton) and a slimy Navy official (James Marsden).