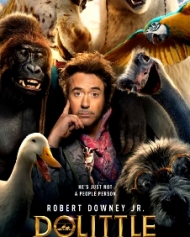 Adventure Comedy Fantasy
Release Date : 17 Jan 2020 (India)
17 Jan 2020 (WorldWide)
Cast : Robert Downey Jr, Antonio Banderas
Director : Stephen Gaghan
Synopsis
Dolittle is an american fantasy comedy film directed by Stephen Gaghan. This film is based on the character of Doctor Dolittle which created by Hugh Lofting. The Robert Downey Jr is the main lead character of this film with Antonio Banderas, Michael Sheen, Emma Thompson, John Cena, Tom Holland.
The movie is bankrolled by the susan Downey under the production banner of RK Films Team Downey, and the music was composed by Danny Elfman. This film is distributed by Universal Pictures.