Disney has just unveiled the first poster of upcoming film Cruella featuring Oscar-winning actor Emma Stone. First announced back in 2016, the film has been one of the most anticipated films from the studio.

The film reportedly a prequel to 101 Dalmatians, will present the origin story for the puppy-powered classic's iconic villainess. The poster shows Emma Stone channelling her sinister side with black and white hair. The actress certainly is rocking Cruella De Vil's iconic look with the two-toned hairstyle, dark lipstick, and smokey eye makeup.

The film's name 'Cruella' on the poster can be seen written in red, while the release date says May 2021. Sharing the teaser poster on February 16, the makers captioned the post as "Hello, Cruel World. New Trailer Tomorrow."

According to reports, back in August 2019, during D23 Expo in Anaheim, California, the studio had shared an exclusive first look of Stone portraying the character. The actress while talking to Entertainment Weekly had said that her Cruella will be a "punk rock" live-action origin story for the classic villain. She had also revealed that the prequel takes place in 1970s London.

In the first look, while Emma can be seen in a similar look with bold red lips, she could also be seen with co-stars Joel Fry and Paul Walter Hauser in the background. The picture shows Emma walking three Dalmatians while wearing a leather jacket. The film also stars Emma Thompson in a supporting role.

This is not the first-time Cruella's story has been seen on the big screen. Back in 2000, live-action film 102 Dalmatians showed Glenn Close playing the character. She will be severing as an executive producer on this new adaptation.

The latest version, written by Kelly Marcel and directed by Craig Gillespie, will recreate Cruella's story, who started out as a designer but turned into a woman obsessed with wearing a coat made of puppy skin. 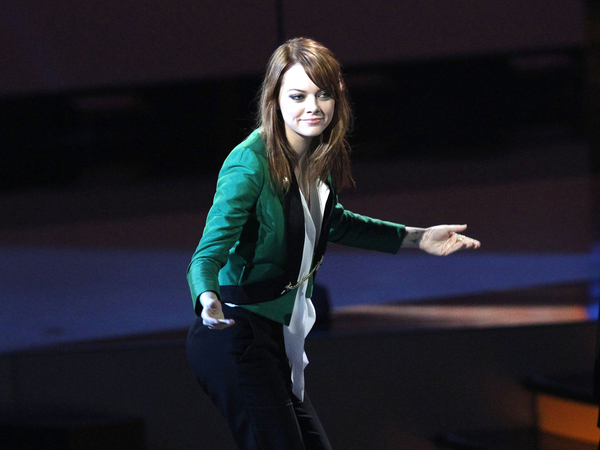 ALSO READ: Emma Stone Says She Would Love To Do Theatre Again