The much-awaited star-studded evening Met Gala 2022 begun in full swing on Monday night, May 2 (EST). Known as the biggest celebrity gathering of the year, many celebrities from the fashion & music industry, politics and the acting world walked the infamous steps at The Met with Gilded Glamour-themed looks.

IN PICS: Best And Worst Dresses At Met Gala

The annual fundraising event was held for the benefit of the Metropolitan Museum of Art's Costume Institute in New York City. This year's theme is Gilded Glamour as the Gala launches with last year's theme in part two titled 'In America: An Anthology Of Fashion' exhibit.

Even before the co-chairs Vanessa Hudgens and La La Anthony arrived at the gala, Vanessa shocked everyone in a sheer black dress. The goth-themed black-coloured Moschino sheer lace gown also had a long train following her.

The actor was accompanied by her co-host La La Anthony. She arrived for the red carpet in a deep red gown by LaQuan Smith.

Vanessa Hudgens at the #MetGala. pic.twitter.com/CoJhw2mdwG

The co-chairs and celebrity couple Blake Lively and Ryan Reynolds arrived at the event in style. While Blake lively wore a Versace gown with a billowing train. Ryan Reynolds looked dapper in a black velvet tuxedo. Notably, Blake's dress paired with Tiara is being compared to that of the Statue of Liberty.

Blake Lively’s dress is unveiled at the #MetGala. https://t.co/2kVWwK9Yn6 pic.twitter.com/Vo4XCydMRt 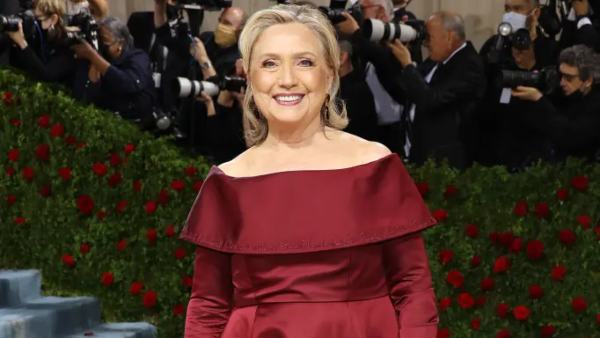 Emma Stone turned heads in a knee-length flapper-style dress by Louis Vuitton at the Met Gala. The dress featured sheer sleeves with satin-covered buttons on the sides and a deep V neck. On the other hand, black was the colour for many stars this year including Bridgerton star Phoebe Dynevor, Gemma Chan, Bella Hadidi, Nikki Minaj and others.

Bella Hadid can do no wrong at the #MetGala https://t.co/7pfrLBlt8g pic.twitter.com/9dR4ZW9Vef

Sebastian Stan popped some colour on the red carpet with an all-pink look. Meanwhile, Oscar Issac, to no one's surprise, turned up in a skirt and rocked the look.

Also in a skirt? Oscar Isaac in @ThomBrowne at the #MetGala pic.twitter.com/ybU93gBH1L

Singer Billie Eilish's custom gown made the most noise at the Met Gala this year. The grammy award winner revealed that the gown was eco-friendly from Gucci. Notably, she had co-hosted the 2021 Met Gala alongside Timothée Chalamet, Naomi Osaka, and Amanda Gorman.

Hailey Bieber also turned up at the event looking angelic in white. She walked the red carpet wearing a feathered duster with a chic, halter-neck slip gown by Saint Laurent. Olivia Rodrigo wore the ultimate 90s look for the event. She wore a sparkling lavender gown by Versace with off-the-shoulder straps and sheer gloves. She completed the look with matching lavender butterfly adornments worn throughout her hair and topped it off with a simple necklace and dangling earrings.

Olivia Rodrigo is a vision in Versace at the #MetGala https://t.co/EsxcqAkJCV pic.twitter.com/cocxycUlpQ