House of the Dragon, the new series based on Martin's 2018 companion book Fire & Blood, a prequel set roughly 200 years before the events of Game of Thrones, has a newer, penetrating and compellingly multi-layered outlook with well-etched character work. It's written as a multi-generational historical account of the Targaryen family's prosperous 300 year reign over Westeros.

This series is predominantly evolved around Viserys I Targaryen (Paddy Considine) non-aggressive efforts to secure his kingdom, Princess Rhaenyra Targaryen (Emma D'Arcy) attempts to assert herself despite being female, Prince Daemon Targaryen (Matt Smith) unhappiness regarding being surpassed for the throne and Rhaenyra's best friend and Otto Hightower's daughter, Lady Alicent Hightower (Olivia Cooke) acceptance of becoming a pawn in complex, ever-shifting power dynamics circulating around the Iron Throne.

The premiere featured sequences of battle and a jousting tournament while bloody childbirth consequences weighed it down emotionally.

Game of Thrones was a far more direct depiction of heroics while this series tends to go much deeper, depicting shades that bring out character traits that are far more realistic. 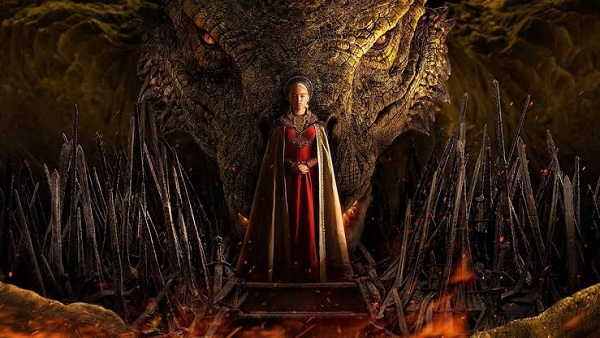 House of the Dragon Episode 2: The Rogue Prince

Palace intrigue continues unabated centered on themes of power, gender and loyalty. Rhaenyra violates the Small Council etiquette, Viserys is being urged to secure the succession through marriage, a disgruntled Daemon appears to be nesting his sinister intentions - this installment basically lays a strong foundation for what is to come. The Rogue Prince revels in developing conflicts. The plotting includes potential alliance building and is set six months after the events of the first episode. The death of King Viserys (Paddy Considine) wife Queen Aemma during childbirth has opened up the plot to intriguing possibilities.

This second episode of the spin-off series that goes back in time, builds up audience fervour by gradually incrementing its decadent glorification of medieval shenanigans evolving around succession issues. Brutality, bestiality, nastiness and perversity continue to find favour.

Considine and Smith ace their roles and the women at the centre of it also make their presence felt. This episode makes the female gaze more integral to the battle for the throne.

The fierce Rhaenyra and the gentle Alicent are contrasting character studies but both wield power and influence that can rival that of the men. Episode two is fairly cryptic and involving. Relationships develop and sour and startling moments like [SPOILER] Princess Rhaenyra's landing outside Dragonstone, add up to the surprises. We know there's disaster coming and we can only hold our breath in anticipation.

House of the Dragon Episode 3: Second of His Name

It's been around three years since the events of The Rogue Prince. The third episode of House of the Dragon pitchforks into its first major battle set-piece. There's a skirmish against the Crabfeeder's Triarchy in the Stepstones, a war instigated by Prince Daemon (Matt Smith) and Lord Corlys (Steve Toussiant) - an effort to strengthen their claims for the throne.

The costumes look fantastic, the production design is lavish and the camerawork is dark but lush. The violence is also fairly gravitating. Rhaenyra (Milly Alcock) and the rest of the realm hear about Laenor Velaryon's (Theo Nate) ascension as a dragon rider, so now Lord Lyonel Strong has the ammunition to justify a second attempt at a Targaryen-Velaryon union.

The writers here have managed to create a strong scenario for some interesting outcomes. It's enthralling to see King Viserys and his party journey into the Kingswood for a hunting expedition for the wee baby Aegon II's name day. The dialogue also is quite weighty with subtext and nuance.

This episode sees an influx of new characters. Some fresh Lannisters (Jefferson Hall), Larys Strong aka "The Clubfoot" (Matthew Needham) and Aemond Velaryon (Will Johnson) shore up the intrigue further. This episode manages to increment the potential for action considerably. We can actually feel the turbulence coming in its wake.

House of the Dragon Episode 4: King of the Narrow Sea

This episode focuses on sexual politics and its effect on the contestants for the throne. Rhaenyra goes on an impromptu night-out with her uncle, and brings into play contentious socio-cultural issues like age, consent issues, power dynamics, and incest. This episode feels much closer to the Game of Thrones than the earlier episodes.

Daemon (Matt Smith) is now being referred to as 'King of the Narrow Sea' following his successful close of the battle for the Stepstones, and he has been restored to the king's court with honours for his efforts. He also renews his odd-ball association with his niece while She, Rhaenyra, continues to reject an increasingly absurd number of attempts by the lords of the realm to vie for her hand in marriage.

There's not much plot here but it's an interesting episode nevertheless. The camerawork is really dark and rather indistinct here. There's a fair bit of intensity and the sexual by-play is rather repulsive.

While this episode explores Rhaenyra's coming of age it also gives us an insight into Otto Hightower's makeup. We finally get to see Rhys Ifans coming into his own.

Episode 4 of House of Dragon is shocking and serious and gives us a dekko into what the coming episodes can bring on the table.