Just like his father, Tiger Shroff is a man of few words. Soft-spoken but articulate when it comes to expressing his thoughts. On screen, he dances like he's got no bones and leaves our jaw dropped with his astonishing action sequences.

'If these challenges weren't there, I wouldn't be able to better myself and bring a better and bigger package every time,' the young lad tells me when our conversation turns towards the topic about bringing something new to the table with every film. We are sitting in his vanity van which is parked inside the spacious Yash Raj Studios.

In an exclusive tête-à-tête with FilmiBeat, Tiger Shroff gets candid about his first shot with Hrithik Roshan, Akshay Kumar's recent comment on today's actors avoiding two-hero films and more.

'My Admiration For Hrithik Roshan Has Grown Even More'

Q. Tiger, you have always expressed that Hrithik Roshan is your childhood hero and you idolise him. Has your equation with him changed now after working with him. Secondly, do you recall your first day with him on the sets of 'War'?

A. Our equation has definitely changed. My admiration for him has grown even more. I am now his bigger fan than what I was before I met and worked with him. We had countless conversations on our work, careers, interests and hobbies. I got to interact with him on screen and off the screen. I have learnt so much from him just by watching him work. It has made me a better person and a better actor today because I got a chance to work with him.

On my first day, I was very nervous and shaking literally because I had my first shot with him. Luckily, it wasn't face-to-face. Because I knew if I see him, I would freeze. We were doing an action sequence side-by-side. I made it a point that I wouldn't look at him only. (laughs)

I was like I am just going to act like I am the only one in the frame right now. Galti se bhi, if I see him, I would literally give up the shot because it was too good to be true. To share screen space with him was always on my bucket list. Now that I am doing it, it's a surreal experience.

Q. Recently, Hrithik Roshan mentioned in an interview that he told the makers that he would do 'War' only if you starred in it. How does it feel when someone of his stature says that?

A. Well, that's the biggest compliment you can receive. Especially when you look up to someone so much and then when he, in turn, compliments you, I think there is no other higher feeling like this.

I remember when we used to do our scenes, many times he would see my shot on the monitor and would just pat me on my back saying, 'Tiger, great shot, man.' I used to call up my mother and tell her about Hrithik Sir complimenting me. That was a huge high for me.

'We Should Have More Two-hero Films In Bollywood'

Q. There was a time when two-hero films were quite popular in Hindi cinema. Unfortunately, slowly, this trend started weaning off. However, you and Hrithik have brought back this trend again with 'War'. What do you think is the reason for actors to shy away from taking up two-hero films? In fact, Akshay Kumar recently said that he finds it sad that actors these days don't want to sign movies having two or more heroes...

A. Definitely, there's insecurity. There's so much competition and comparison that's going around. I can totally see why that's happening nowadays. However, I think if there's a script that's favourable to both parties and to the film as well in the bigger picture, then why not?

It's a total high for the audiences when two actors come together and especially if there were of two similar type. I think it's fantastic and we should have more of these. But yes, it's a challenging procedure. My father did many two-hero films like 'Ram Lakhan', 'Parinda', 'Andar Bahar'. It's a trend that should definitely come back to life. I guess our filmmakers should make scripts that allow that to happen.

Nowadays, every actor has his or her genre which they stick to, which is great. I love playing to my strengths. I love the tag of an 'action hero' because that gives me an identity in an industry where there's so much competition. How does one stand out?

'I Know Why I Have Been Accepted'

Q. How secure are you as an actor? Do you keep a tab on what your contemporaries are attempting in terms of work?

A. I don't really keep a tab. Because I know what they are doing is something phenomenally and something that's so hard to achieve. So, I don't sync myself that way.

I am really secure in the fact that I know what my strengths are and I know why I have been accepted and what the audiences have accepted from me. Keeping that in mind, I feel good where I am.

Q. What's the most exciting part for you about being an actor?

A. The best part of being an actor is that I can reach and touch a lot of people and make differences in some way or the other; stir some emotions in people. That's a very powerful thing to possess.

'My Father Is Very Cool And Chilled Out About Everything

Q. Despite all the success and adulation, what keeps you so grounded and humble?

A. Just watching my father. From his beginnings to now, how he hasn't changed. The way he speaks at home, to me and to the people on the sets. He doesn't treat anybody less or anybody great. You may be the most important or the least important person in the country, but he will be the same way. That's something I really admire about him.

Q. How did he react when he watched the trailer of 'War'?

A. He was super excited and very happy. He is a man of a few words. He is very cool and chilled out about everything. So, he doesn't express in like these larger-than-life expressions. He told me, 'Be bindaas, exam pass ho jayega'.

'I Have Seen Both Sides To The Coin'

A. Oh, I haven't seen that film yet. I have to catch that up. Right now, I am shooting for 'Baaghi 3'. After that, I will start with 'Rambo'. The script of the film is ready. But I have to finish 'Baaghi 3' before starting that film.

Q. Finally when you look back at your journey, are you content with how things have turned out for you?

A. I feel blessed and very lucky. I have seen both sides to the coin and I am very grateful that so much has happened very early in my career. 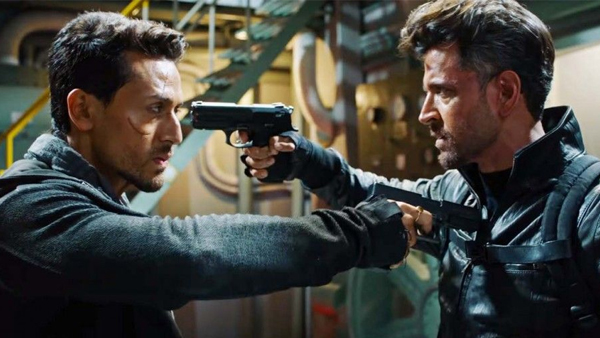 War FIRST MOVIE REVIEW Out: This Hrithik Roshan vs Tiger Shroff Film Will Blow Your Mind!