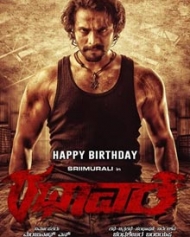 Rathaavara movie is a action thriller written and directed by Chandrashekar Bandiyappa and produced by Dharmashree Manjunath while Dharma Vish scored music for this movie.

The story revolves around the series of clashes between two protagonists Sri Murali and Ravishankar. Rathaavara also portrays trust and belief, which is carried between two well-wishers, who eventually become rivals.

Is Ravishankar playing a political goon and Sri Murali as his advicer? To know this watch the movie at your nearest theatres.