Cricket fever everywhere!!! Analysing this terrific downfall of audience towards movies, Sandalwood filmmakers have postponed the releasing dates of the movies due to World Cup.

There are nearly 7-8 movies which are ready to hit the box office, but postponed its releasing dates due to World Cup. Last Week, Raate and Krishna Leela movies were released in Gandhinagara, and both the films have receieved a 'thumbs up' from both Kannada audience. 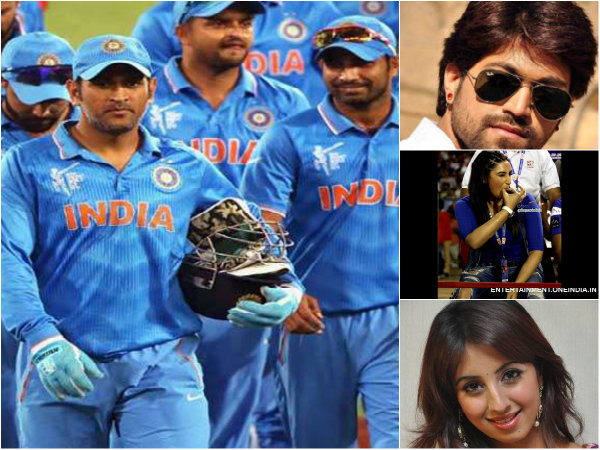 But, ironically this week there is no big release in Gandhinagara. Two small budget movies 'Mutthina Maleyali' and 'Kaldogbitte' have been released. This depicts, Kannada filmmakers are desperately waiting for the World Cup to get over.

Yes, starting from Puneeth Rajkumar's Rana Vikrama till Shivarajkumar's Vajrakaya are ready to hit the big screens. However, there exist the availabilty of theatres and dates.

Initially, Vaasthu Prakara will release on April 2 followed by Katte on April 3. There are still more 3-4 movies releasing this April. Continue to read the slideshow to know Kannada movies that are slated to release for April...

Katte is the upcoming movie releasing on April 3. The movie is the official remake of Tamil movie 'Kedi Billa Kiladi Ranga'. Touted to be a comedy entertainer, Katte stars Om Prakash Rao, Chandan, Shravya, Nagashekar and others.

After many postponements, Yogaraj Bhat's Vaasthu Prakara is releasing on April 2. Though, the movie was wrapped up to hit the theatres, the team has waited for the World cup to get over. Vaasthu Prakara stars Jaggesh, Rakshit Shetty, Aishani Shetty and Parul Yadav in the lead roles.

It is already too late for Sudeep's Ranna. Earlier, Sudeep himself had confirmed that, Ranna will be releasing for April 3. But, the team has postponed the releasing dates. According to the reports, Ranna will hit the theatres in the third week of April.

Ravichandran's Apporva is making huge rounds in Gandhinagara. The movie portrays a different story-line i.e.., a love story between a teenager and an old man. Apporva was suppose to release hit the theatres before April. But, lets wait for the official confirmation by the filmmakers.

Pawan Wadeyar's Rana Vikrama is the most awaited movie of 2015. Puneeth aka Appu's fans are eagerly waiting for the movie to release. Earlier, the movie was slated to release on Puneeth Rajkuamr's birthday. But, if the reports are to be believed Rana Vikrama will release on April 10.

After watching Darshan in Ambareesha(2014), his fans are eagerly waiting him to see on big screens in 2015. Darshan's upcoming movie Airavata with AP Arjun is also slated to release for April. Let's wait.

Vajrakaya is the upcoming movie starring Hatrick hero Shivarajkumar. Directed by Harsha and produced by Manohar and Gopi, Vajrakaya is yet to release its audio of the movie. Is, Harsha also waiting for the World Cup to get over? Keep locked to FilmiBeat, we will bring you more updates on movies releasing this April.