Sandalwood actor and director Ravichandran is busy celebrating his daughter's entry into a new phase of life. In the last few months, the Premaloka star was seen meeting up some of the biggest film stars and politicians to invite them to his daughter's wedding. Apparently, the invite was an extravagant one. Reports said, each of them cost around three thousand rupees. Similarly, the wedding was a star-lit affair too. Several actors and celebrities attended Geethanjali's wedding reception last night. Superstar Rajinikanth was also spotted. Have a look at the pictures below!

Geethanjali looked gorgeous in a black designer dress with golden sequence. Meanwhile, Ajay chose a formal look. The bride and groom compliment each other well and look adorable together. Ajay is a businessman by profession.

Ravichandran personally invited stars from other film industry to his daughter's wedding. Superstar Rajinikanth flew down to Bangalore to bless the newly-wed couple. His presence was one of the highlights of the reception.

Rashmika Mandanna who was spotted at the wedding reception looked simply elegant in a white dress paired with minimal jewellery. She was previously seen at Yuva Rajkumar's reception.

Golden Star Ganesh and Sandalwood comedian Rangayana Raghu were seen sharing a laugh as they greeted the groom. It indeed was a star-studded affair.

Mega Star Chiranjeevi also took time off his busy schedule to attend Geethanjali's wedding reception. Two days ago, he was spotted at Yuva Rajkumar's reception. Ravichandran and Puneeth Rajkumar visited the Telugu actor at his residence to invite him to the wedding.

Kannada actresses Sudharani and Shruthi looked absolutely beautiful at the reception last night. Both stars were decked in silk sarees.

Real Star Upendra along with wife Priyanka was spotted at the reception. The couple recently returned from their trip to the US. They were also spotted at Yuva Rajkumar's reception. 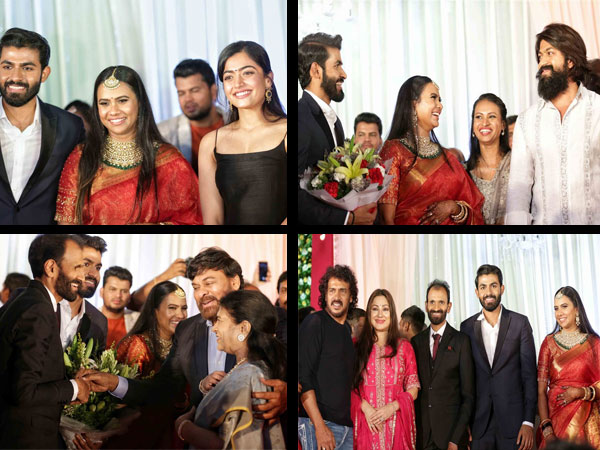