Puneeth Rajkumar's Nata Sarvabhouma and Shivarajkumar's Kavacha are the most talked about movies of month. While Shivanna's crime thriller will hit the theaters on January 18, 2019, Puneeth's action film is reported to release on January 25, 2019. With the releases only a week apart, the Kannada movies are going to be giving tough competition to each other. For a lot of reasons and the fan's reviews as of now, we wonder if Puneeth's Nata Sarvabhouma will end up overpowering Shivarajkumar's Kavacha! Read below for more deets.

Shivanna's fans are highly excited about Kavacha's release next week. But, seems like Puneeth's fans are already celebrating Nata Sarvabhouma prior to its release. Going by the social media trend, it can be said that the hype surrounding Puneeth's film is way more than Kavacha. Will this affect Kavacha's success? Well, we need to wait and watch.

Power Star Puneeth's Nata Sarvabhouma is an action film with original storyline. This alone creates a curiosity factor among the fans. Though, Shivarajkumar's Kavacha has already grabbed a lot of attention, it is a remake of Malyalam movie Oppam. So the viewers would have an idea about the story line.

Kavacha has some beautiful tracks. The songs have already received lot of view on YouTube. But, Nata Sarvabhouma songs have gone viral ever since their launch. Especially, the song Open The Bottle written by Yograj Bhatt has become the anthem of the mass.

Kavacha is G.V.R Vasu's directorial debut. Though the movie is a remake of Malyalam film, the director said about 50 % of the script has been altered to meet the needs of Kannada audience. The experimentation on the story somewhere makes the fans apprehensive. 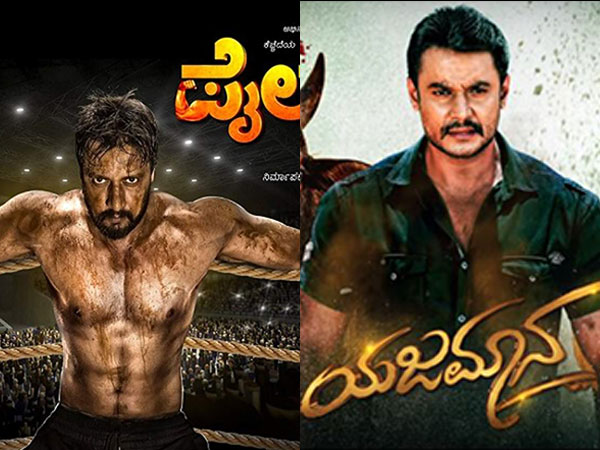 MOST READ : Sudeep & Darshan To Come Together For Sankranti 2019! It's Twice The Treat For Fans